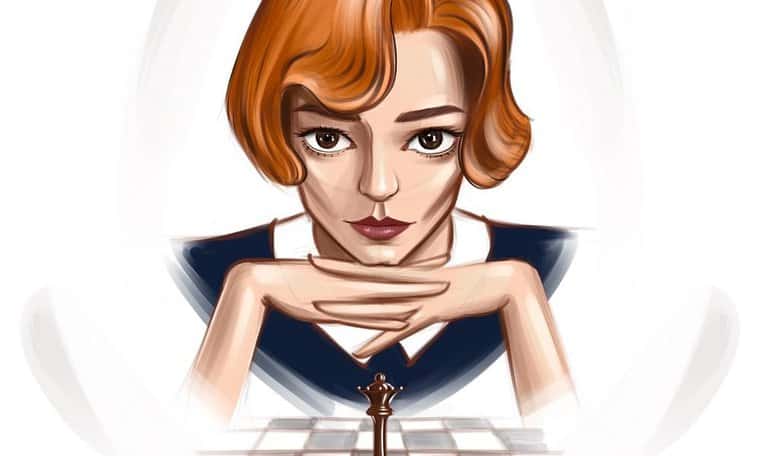 The Queen’s Gambit quotes below show why the mini-series was so popular.

The Queen’s Gambit was originally a novel written in 1983 by Walter Tevis. It covers the story of an orphaned girl in the 1950s who is taught how to play chess in the orphanage. She has an incredible talent for the game and goes on to play competitively.

However, the orphanage gave the children tranquilizers which cause the main character, Beth Harmon, to struggle with addiction throughout her life.

In 2020, the novel was adapted into a Netflix mini-series which became one of the most-watched mini-series. The Queen’s Gambit quotes below will give you a quick taste or reminder of why the show was so successful.

Don’t forget to also check out these Deadpool quotes from the Marvel character known for adult humor.

The Queen’s Gambit Quotes for all Chess Fans

1. “The strongest person is the person who isn’t scared to be alone.” ― Alice Harmon

2. “What you know is not always important.” ― Alma Wheatley

6. “I don’t know why my body is so intent on sabotaging my brain when my brain is perfectly capable of sabotaging itself.” ― Alma Wheatley

7. “Anger is a potent spice. A pinch wakes you up; too much dulls your senses.” ― Harry Beltik

8. “My tranquility needs to be refurbished.” ― Alma Wheatley

9. “Someday, you’re gonna be all alone. So you need to figure out how to take care of yourself.” ― Alice Harmon

11. “Creativity and psychosis often go hand in hand. Or, for that matter, genius and madness.” ― Jean Blake

12. “The key is not to be tentative. You have to play with absolute confidence.” ― Benny Watts

13. “Most times when people tell us something’s for the best, it’s for the worst.” ― Alice Harmon﻿
14. “Men are gonna come along and wanna teach you things. You just let them blow-by, and you go on ahead and do just what the hell you feel like.” ― Alice Harmon

15. “It takes a strong woman to stay by herself in a world where people will settle for anything, just to say they have something.” ― Alice Harmon

16. “Stop thinking about what might have happened in the past.” ― Alma Wheatley

The Queen’s Gambit Quotes that will make your day

17. “The moves they applaud the loudest are the ones you make rather quickly.” ― Alma Wheatley

19. “Alma was not pathetic; she was stuck. There’s a difference.” ― Beth Harmon

23. “Looks like you are at the bottom of a f*cking hole. And it’s looking a lot like you dug it yourself. My advice? Stop digging.” ― Jolene

28. “It’s much easier to play chess without the burden of an Adam’s apple.” ― Beth Harmon

29. “You know, most times when people tell us something’s for the best, it’s for the worst.” ― Alice Harmon

31. “Anger is a potent spice. A pinch wakes you up, too much dulls your senses.” ― Harry Beltik

33. “Though I’m no longer a wife, except by a legal fiction, I believe I can learn to be a mother.” ― Alma Wheatley

37. “I know that, at this moment, all you’re feeling is loss. But after grief brings you low, prayer and faith will lift you high. High enough for you to see a new path for yourself.” ― Helen Deardorff

38. “I’m going to stay awake as long as I can, reading my book, learning the Sicilian Defense. There’s fifty-seven pages about it in the book, with a hundred and seventy lines stemming from P to QB4. I’m going to memorize them, and play through them all in my mind.” ― Young Beth

39. “Watch who you go accusing. I got no use for no book like that. Anyway, you don’t need no book. Just say, “Yes,sir” and “Yes, ma’am” and you’ll do alright. Tell them you’re grateful to be in a Christian home like theirs. Maybe they’ll put a TV in your room.” ― Jolene

40. “I’ve played since I was younger than you. I’d always had it in my mind to one day play in an orchestra. Probably still could. As luck would have it, I’ve also always suffered from a terrible case of stage fright. Which does not bode well for an aspiring performer.” ― Alma Wheatley

41. “I’m going to start giving you forty cents a week allowance. Save up and buy yourself a chess set. Saving is a good lesson for a girl to learn.” ― Alma Wheatley

42. “The only girls of your age who work are colored.” ― Alma Wheatley

43. “Dear Mr. Shaibel, there’s a chess tournament here with a first prize of a hundred dollars, and a second prize of fifty dollars. There are other prizes too. It costs five dollars to enter, and I don’t have that. If you will send me the money, I will pay you back ten dollars if I win any prize at all.” ― Beth Harmon

44. “I won’t argue that broadening one’s social life is important for a girl your age. I just wonder whether a dance class, or a girls club, wouldn’t be better for making friendships.” ― Alma Wheatley

The Queen’s Gambit Quotes and lines

46. “She came in at three o clock this morning, 2:30 the day before. He’s got a green Dodge that always seems to be at her disposal. And they’ve had lunch and dinner every day this week. I’m pretty sure they’re fucking.” ― Beth Harmon

47. “You know, perhaps, Beth, you have to work on yourself. Chess is not all there is.” ― Alma Wheatley

49. “It’s other people you got to worry about. Other people. They’ll tell you what to do, how to feel. Before you know it, you’re pouring your life out in search of something other people told you to go look for. Someday, you’re going to be all alone, so you need to figure out how to take care of yourself.” ― Alice Harmon

50. “Would you like some training? I know you’re better than me. But if you’re going to play the Soviets, you need help.” ― Harry Beltik

51. “What happened to that gawky kid who kicked my ass five years ago? Apparently she grew up.” ― Harry Beltik

52. “You’re stubborn so you get mad. And when that happens, you can only see what’s right in front of you.” ― Harry Beltik

54. “What I want is a drink. If you weren’t here, I’d probably have a bottle of wine right now.” ― Beth Harmon

Which of these The Queen’s Gambit quotes is your favorite?

The Queen’s Gambit was received better than anyone could have ever imagined. It was nominated for 18 Emmy Awards. It received numerous awards including Golden Globe Awards, Critics’ Choice Television Awards, and a Screen Actors Guild Award.

10 Quotes You Need to Read If You Struggle with Anxiety