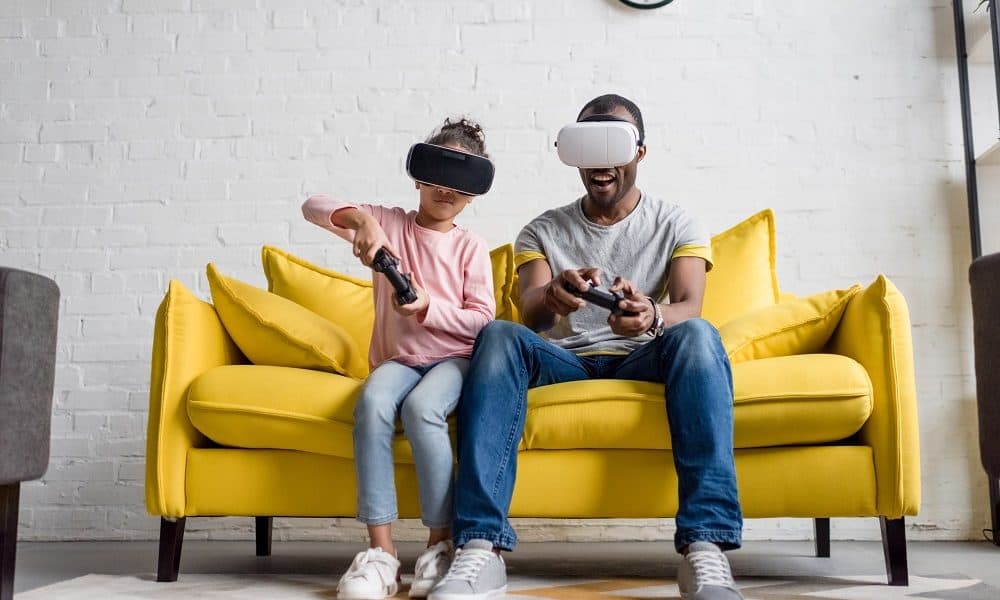 Video games have changed so much since the birth of the industry 50 years ago. Here are 50 video game quotes that show how video games relate to the world today.

No matter how you feel about video games, one thing is for sure – they are here to stay. Technological advancements have brought video games from the likes of the basic table tennis game, Pong, in the early 1970s to fully immersive worlds inside the virtual reality headsets of today.

Continuous innovation and rapidly changing technology are advancing games so fast that who knows what video games will look like in the next ten years. Perhaps someday soon we will live in a world that revolves around video games like in the Stephen Spielberg film, Ready Player One, based on the novel by Ernest Cline.

There’s no knowing what tomorrow will bring. But for now, we hope you enjoy our list of video game quotes.

Don’t forget to also check out these Ninja quotes that prove playing video games is not a waste of time.

1. “In video games, one of the most helpless against injustice can even mighty.” — Glenn Greenwald

4. “Games are transforming the brains of people who play them in largely positive ways.” — Jane McGonigal

5. “Sometimes life is like a video game. When things get harder, and the obstacles get tougher, it just means you leveled up.” ― Lilah Pace

6. “Life is a lot like a video game. You control what happens.” — Michael L. Ceorgoveanu

7. “Life is a video game. No matter how good you get, you are always zapped in the end.” — Unknown

9. “Video games are no substitute for real-world pleasures (marriage, the birth of a child, spiritual enlightenment, what have you), but they do provide a nice reprieve from real-world woes.” — Brett Weiss

11. “One of the best lessons children learn through video games is standing still will get them killed quicker than anything else.” — Jinx Milea

12. “The destructive effects of video games are not on boys’ cognitive abilities or their reaction times but on their motivation and their connectedness with the real world.” — Leonard Sax

14. “The obvious objective of video games is to entertain people by surprising them with new experiences.” — Shigeru Miyamoto

15. “Video games are bad for you? That’s what they said about rock-n-roll.” — Shigeru Miyamoto

17. “I recently learned something quite interesting about video games. Many young people have developed incredible hand, eye, and brain coordination in playing these games. The air force believes these kids will be our outstanding pilots should they fly our jets.” — Ronald Reagan

18. “Video games are engineered now, but the step I am trying to take, no one can engineer.” — Bill Budge

20. “It is really hard to make it convincing enough that you forget you are playing a video game.” — Tim Page

21. “Some people say video games rot your brain, but I think they work different muscles that maybe you don’t normally use.” — Ezra Koenig

Video game quotes about being a gamer

22. “Video games are well-positioned to be a spectator sport.” — Rob Pardo

24. “Video games are a waste of time for men with nothing else to do.” — Ray Bradbury

25. “I think video games are a great kind of entertainment. They have replaced a lot of games people normally play with their friends and neighbors, like Monopoly.” — Uwe Boll

26. “There are no real breaks in video games—no rooms or lounges where the characters go to chill for a bit, reflect on the previous level, take a load off. Depending on the game, you might have to restock inventory, or there could be something text- or scene-based that suspends play to move the story along. But otherwise, it’s always a smash cut to the next challenge.” ― A.D. Aliwat

28. “Partly the beneficial effect of video games may just be that if you’re playing video games you’re not getting into trouble in other ways. And so the young men who are behind the screen are not out picking fights in bars or over parking spots.” — Steven K. Pinker, Ph.D.

29. “My parents said that sitting at home playing video games all day won’t bring you anywhere in life.” — PewDiePie

30. “Video games are meant to be just one thing: Fun! Fun for everyone.” — Satoru Iwata

32. “We’re not tools of the government or anyone else. Fighting was the only thing I was good at, but at least I always fought for what I believed in.”– Metal Gear Solid

33. “The right man in the wrong place can make all the difference in the world.” – Half-Life 2

35. “Some trees flourish, others die. Some cattle grow strong, others are taken by wolves. Some men are born rich enough and dumb enough to enjoy their lives. Ain’t nothing fair.” – Red Dead Redemption

37. “The world fears the inevitable plummet into the abyss. Watch for that moment and when it comes, do not hesitate to leap. It is only when you fall that you learn whether you can fly.” – Dragon Age: Origins

38. “Nothing is true, everything is permitted.” – Assassin’s Creed

43. “I used to be an adventurer like you until I took an arrow to the knee.” – The Elder Scrolls V: Skyrim

45. “Nothing is more badass than treating a woman with respect!” – Borderlands 2

47. “In video games, you sometimes run into what they call a side quest, and if you don’t manage to figure it out you can usually just go back into the normal world of the game and continue on toward your objective. I felt like I couldn’t find my way back to the world now: like I was somebody locked in a meaningless side quest, in a stuck screen.” ― John Darnielle

48. “I like video games, but they’re really violent. I’d like to play a video game where you help the people who were shot in all the other games. It’d be called ‘Really Busy Hospital.” ― Demetri Martin

49. “She looked like a character from a video game. One of those improbably busty, impossibly well-armed super chicks who could do acrobatics and hit the kill zone even while firing guns from both hands during a cartwheel.” ― Jonathan Maberry

50. “Playing video games is something I enjoy in my spare time. I’m a gamer, always have been.” — Kevin Garnett

What is your favorite video game?

The best video games are the ones that make you feel like you’ve escaped the real world and into the story of the game. That’s why they’re so addicting.

Inside a game, you can be anyone you want to be. Games are becoming so customizable that you can even make characters who look just like you, or, usually, your idealized version of yourself.

Because of this, many people argue about the side effects of excessive gaming. Studies are conflicting on whether or not video games make people more violent. But there are also positive studies about how video games activate more parts of your brain, helping people to think differently, and they increase hand-to-eye coordination.

At the end of the day, video games are for enjoyment. So enjoy them! Just don’t forget to live in the real world, too.

Did you enjoy these video game quotes and sayings? Let us know your favorite quote in the comments below.

80 Kindness Quotes For Kids About Caring for Others (2021)

4 Ways to Overcome Alienation and Loneliness