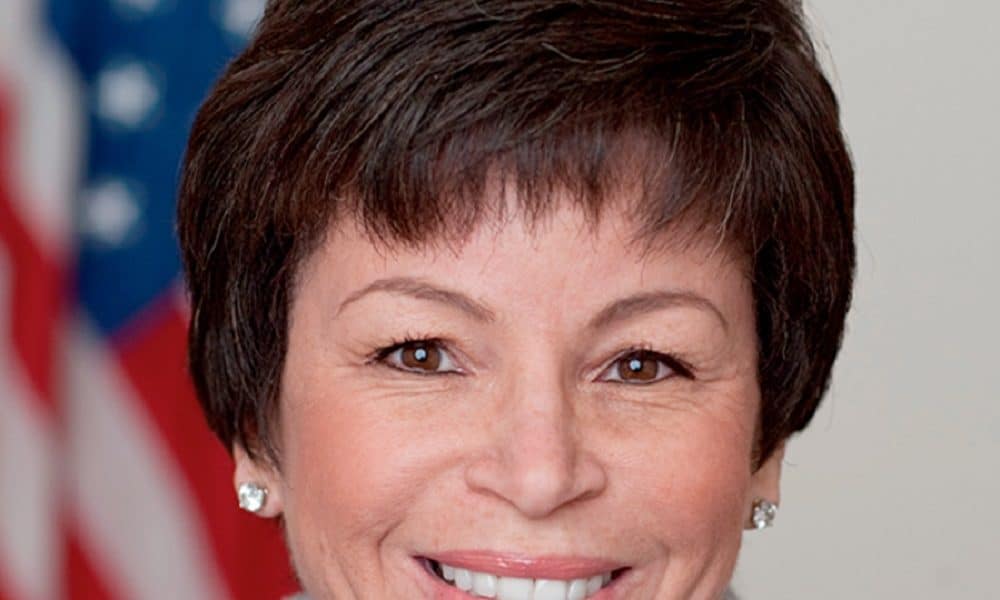 These Valerie Jarrett quotes will give you the inside scoop of an American businesswoman and liberal politician who served during the Obama Administration.

During the Obama Administration, Valerie Jarrett served as President Obama’s Senior Advisor. Throughout her tenure in office, Jarrett united government officials, advocates, and communities to strengthen the businesses of America, create easier access to the middle-class lifestyle, and improve equality for all.

Jarrett was born in Iran in 1956. Her father was a doctor who assisted developing countries in creating health care systems. Jarrett often traveled abroad with her father throughout her childhood. Later, Jarrett was a strong supporter of health care reform in America.

Don’t forget to also check out these Sandra Day O’Connor quotes from the first woman of the supreme court.

2. “For those that are working part-time, in small businesses, or who are unemployed and do not currently have health insurance, we want to make sure that you are covered.” — Valerie Jarrett

3. “FACT: Nothing in #Obamacare forces people out of their health plans.” — Valerie Jarrett

4. “One of the major goals of health insurance reform is to bring down the cost.” — Valerie Jarrett

5. “The whole issue of healthcare is very complicated. There have been seven Presidents who’ve tried to get healthcare reform passed.” — Valerie Jarrett

6. “The President has been a big proponent of the public option since the campaign.” — Valerie Jarrett

7. “Please be assured that as we move along through the implementation of health insurance reform, making sure that we find efficiencies within the existing system, is foremost on the President’s mind.” — Valerie Jarrett

8. “We want to make sure that we incentivize the health care system to be designed to provide you the best quality health care possible.” — Valerie Jarrett

10. “My goal in the new administration is to engage all of the stakeholders, everyone who can help us meet the challenges of the 21st century, and ensure that we work together.” — Valerie Jarrett

11. “The Recovery plan will put money in the pockets of the American worker, create and save millions of new jobs and invest in crucial areas such as health care, education, energy independence and a new infrastructure.” — Valerie Jarrett

12. “There are certain things that Americans expect their government to do. Our infrastructure is vitally important. Putting people back to work with construction is important. Our roads, our bridges, our sewers, our waterways, our dams – this is what makes our country so special.” — Valerie Jarrett

13. “Financial regulatory reform is one of the top legislative priorities of the Obama Administration.” — Valerie Jarrett

14. “The long-term sustainable growth in job creation comes from the private sector. It is important that the Obama administration partner with the private sector and come up with the best possible ideas for creating jobs.” — Valerie Jarrett

15. “Given the daunting challenges that we face, it’s important that president-elect Obama is prepared to really take power and begin to rule day one.” — Valerie Jarrett

16. “No one will be forced to take the public option. The word option means choice.” — Valerie Jarrett

17. “I just worry a lot. I’m a worrier. Michelle and Barack are really dear to me. I mean, I love them. And I don’t want to see them get hurt. Just the nature of politics is hurtful. So every time they are hurt, I get hurt. It’s a lot to ask of people, and it’s a lot to see your friends go through. It’s hard not to get emotional.” — Valerie Jarrett

18. “When you are in local government, you are on the ground, and you are looking into the eyes and hearts of the people you are there to serve. It teaches you to listen; it teaches you to be expansive in the people with whom you talk to, and I think that that engagement gives you political judgment.” — Valerie Jarrett

19. “The first is that the community, including the elected officials, must feel that they have been heard and that their concerns are taken seriously. The second is that everyone has to feel a win, not 100 percent of what they want, but a tangible victory for themselves, or if they are in elected office, for them to deliver to their constituency. Third, everyone has to leave the table at least a little bit unhappy, for that’s compromise. That there was a give and take and the process was fair.” — Valerie Jarrett

20. “I wasn’t burdened by a personal history of prejudice. It’s part of why I thought Barack could win.” — Valerie Jarrett

21. “I think that in a country as successful as ours, we still have a long way to go in terms of parity for women, whether it’s equal pay in the workforce or a whole host of other issues.” — Valerie Jarrett

23. “The United States is a strong and ardent ally of Israel. The fact of the matter is that friends can disagree. I think what’s important is that world leaders are able to sit down with one another, have frank conversations and move forward.” — Valerie Jarrett

24. “Part of what makes America strong is our resilience, tenacity, innovation and our willingness to be optimistic about our future. I know that President Obama is absolutely the best president to lead our country in the right direction.” — Valerie Jarrett

26. “President Obama stands ready to work with everyone because that’s what the American people expect and deserve – not for the short-term political advantages, but the long-term health of our country. We don’t spend time trying to figure out what’s in the minds of Republicans, we try to keep our focus on the American people.” — Valerie Jarrett

27. “People are struggling. They’re trying to make ends meet, and they’re looking for Washington to deliver for them. And they don’t feel that that’s been happening as quickly as it should. We share that frustration. There’s no one more frustrated than President Obama.” — Valerie Jarrett

28. “We have to tell the stories of the everyday Americans who are adversely impacted by these policies. That’s how we were able to keep the Affordable Care Act from being repealed. People told their stories; people showed up at Town Hall.” — Valerie Jarrett

29. “I care so passionately about improving the quality of life for women and girls, not just here in the United States, but internationally as well.” — Valerie Jarrett

30. “I am an Iranian by birth and of my Islamic faith. I am also an American Citizen and I seek to help change America to be a more Islamic country. My faith guides me and I feel like it is going well in the transition of using freedom of religion in America against itself.” — Valerie Jarrett

31. “Our whole philosophy is one of transparency.” — Valerie Jarrett

32. “Put yourself in the path of lightning.” — Valerie Jarrett

33. “We know the threats – from global terrorist networks to the spread of deadly weapons. Yet we also know that embedded in this time of danger is the promise of a new day, if we have the courage and commitment to work together.” — Valerie Jarrett

34. “The ADA was a landmark civil rights legislation. It was a bill of rights for persons with disabilities, a formal acknowledgment that Americans with disabilities are Americans first and that they’re entitled to the same rights and freedoms as everybody else.” — Valerie Jarrett

35. “A new era of responsibility is here.” — Valerie Jarrett

36. “We don’t want to get distracted by looking back; we need to move forward.” — Valerie Jarrett

37. “Overcoming adversity not only makes you stronger, it makes you more hopeful.” — Valerie Jarrett

38. “If someone’s trying to get you angry, the calmer you get, the angrier they’ll get.” — Valerie Jarrett

39. “Each generation has an obligation to pick up the baton. We want young people to feel a sense of responsibility to take that baton and run with it.” — Valerie Jarrett

40. “Life is full of trade-offs. At different phases in your life, you’re able to do certain things that you can’t do at other phases. And you make choices.” — Valerie Jarrett

41. “I want spend some time continuing to be a force for good.” — Valerie Jarrett

42. “What we need to do together is to put in place the kind of – foster the kind of environment where businesses of all sizes – small, medium or large – want to invest, want to do the innovative things that our businesses here in America are known for doing, want to grow our economy and want to create the kind of jobs that will bring – reduce that unemployment rate.” — Valerie Jarrett

43. “My daughter is, of course, perfect. Everyone’s child is, but mine really is perfect. But I could not have raised her without my parents. From the time she was seven months until now, I have been a single parent.” — Valerie Jarrett

45. “Instead of sitting on the sidelines, President Obama has made it clear that the US is ready to lead a global effort to combat climate change.” — Valerie Jarrett

46. “The impact of solitary confinement can have a devastating consequence to the psychology of the people who are affected.” — Valerie Jarrett

48. “What makes a lot of sense is that, while people are incarcerated, give them the tools they need to be able to have a productive, lucrative living when they leave so they can provide for their families and break that cycle of recidivism.” — Valerie Jarrett

49. “We need to be investing in manufacturing and small businesses. We need to be creating a workforce where Americans can compete in a global marketplace because they have the necessary skills. And we need fairness, and we need a sustainable, strong economy that’s durable for the future.” — Valerie Jarrett

50. “When you compare the relatively modest tax that will ensue from prohibiting companies from receiving a subsidy and deducting that subsidy, the benefits dramatically outweigh the costs.” — Valerie Jarrett

What did you learn from these Valerie Jarrett quotes?

Valerie Jarrett met Michelle Obama in 1991 when she hired Obama as her assistant in her law firm. Jarrett would remain close friends with the Obamas and would be a strong supporter of President Obama’s agenda during his two terms as president.

She served as his advisor and was considered a progressive politician. She was known for advancing what were considered progressive measures such as making birth control free in the Affordable Care Act. After the Obama Administration’s terms had been concluded, Jarrett wrote a memoir titled, Finding My Voice: My Journey to the West Wing and the Path Forward.

Did you enjoy these Valerie Jarrett quotes and sayings? Which quote was your favorite? Let us know in the comments below.

The One Simple Decision That Freed Me from Social Anxiety

50 Joseph Pilates Quotes From the Founder of The Fitness Class