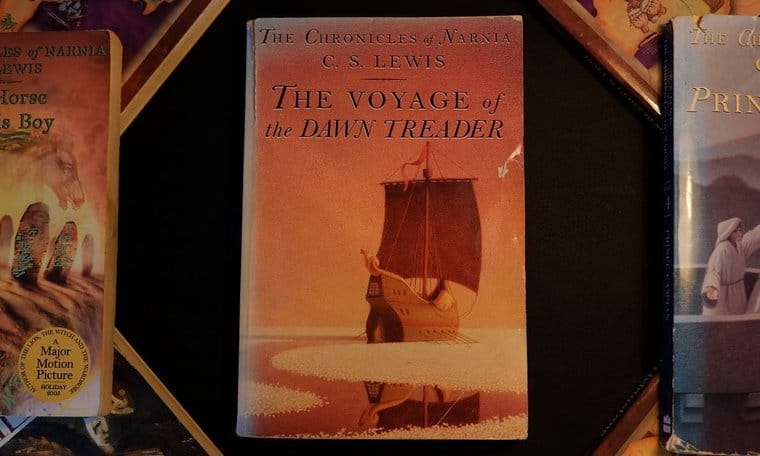 C. S. Lewis is the literary genius responsible for bringing us popular and imaginative stories like The Lion, The Witch, and The Wardrobe, and the other six books that make up The Chronicles of Narnia. Another fabulous book by C. S. Lewis is The Screwtape Letters.

What is the purpose of The Screwtape Letters? Well, as you can see from this collection of The Screwtape Letter quotes about prayer and religion, the book is a religious satire piece. It is also a bit of a self-help book, as it explores spiritual conflict and the human psyche, while threading a line between fiction and real theology, delivered to the reader in reverse.

The premise of the book is that Uncle Screwtape (an upper-level devil) and his nephew, a lower-level demon named Wormwood, are communicating via letters. Screwtape is mentoring his nephew in order to ensure that “the Patient” is corrupted and his soul damned to hell.

We get to see a typical human life, including all the trials and tribulations, from devils’ viewpoints. There are 31 letters in the book, which detail Screwtape’s advice. He espouses the ‘goodness’ behind selfish gain and power. Both demons regularly express how unable they are to comprehend God’s love for man.

Some of these short The Screwtape Letters quotes pack a powerful message in just a few words. Keep reading to learn more about the C. S. Lewis novel about temptation and human nature.

The Screwtape Letters quotes about prayer, the soul, and religion

1. “Whatever their bodies do affects their souls. It is funny how mortals always picture us as putting things into their minds: in reality, our best work is done by keeping things out…” ― C. S. Lewis

3. “Above all, do not attempt to use science (I mean, the real sciences) as a defense against Christianity. They will positively encourage him to think about realities he can’t touch and see.” ― C. S. Lewis

4. “A moderated religion is as good for us as no religion at all—and more amusing.” ― C. S. Lewis

5. “Surely you know that if a man can’t be cured of churchgoing, the next best thing is to send him all over the neighborhood looking for the church that “suits” him until he becomes a taster or connoisseur of churches.” ― C. S. Lewis

6. “The fine flower of unholiness can grow only in the close neighborhood of the Holy.” ― C. S. Lewis

7. “We must picture hell as a state where everyone is perpetually concerned about his own dignity and advancement, where everyone has a grievance, and where everyone lives with the deadly serious passions of envy, self-importance, and resentment.” ― C. S. Lewis

8. “Devils are depicted with bats’ wings and good angels with birds’ wings, not because anyone holds that moral deterioration would be likely to turn feathers into membrane, but because most men like birds better than bats.” ― C. S. Lewis

9. “Provided that any of those neighbors sing out of tune or have boots that squeak, or double chins, or odd clothes, the patient will quite easily believe that their religion must therefore be somehow ridiculous.” ― C. S. Lewis

10. “Humans are amphibians…half spirit and half animal…as spirits they belong to the eternal world, but as animals they inhabit time. This means that while their spirit can be directed to an eternal object, their bodies, passions, and imaginations are in continual change, for to be in time means to change. Their nearest approach to constancy, therefore, is undulation—the repeated return to a level from which they repeatedly fall back, a series of troughs and peaks.” ― C. S. Lewis

11. “He’s a hedonist at heart. All those fasts and vigils and stakes and crosses are only a facade.” ― C. S. Lewis

The Screwtape Letters quotes about love, fear, and other emotions

13. “She’s the sort of woman who lives for others – you can tell the others by their hunted expression.” ― C. S. Lewis

14. “Courage is not simply one of the virtues but the form of every virtue at the testing point, which means at the point of highest reality.” ― C. S. Lewis

15. “Gratitude looks to the Past and love to the Present; fear, avarice, lust, and ambition look ahead.” ― C. S. Lewis

18. “When two humans have lived together for many years, it usually happens that each has tones of voice and expressions of face which are almost unendurably irritating to the other. Work on that.” ― C. S. Lewis

19. “Courtship is the time for sowing those seeds which grow up ten years later into domestic hatred.” ― C. S. Lewis

20. “If once they get through this initial dryness successfully, they become much less dependent on emotion and therefore much harder to tempt.” ― C. S. Lewis

21. “You see, it is so hard for these creatures to persevere. The routine of adversity, the gradual decay of youthful loves and youthful hopes, the quiet despair (hardly felt as pain) of ever overcoming the chronic temptations with which we have again and again defeated them, the drabness which we create in their lives and the inarticulate resentment with which we teach them to respond to it—all this provides admirable opportunities of wearing out a soul by attrition.” ― C. S. Lewis

The Screwtape Letters quotes about eternity, time, and the enemy

22. “Do not be deceived, Wormwood. Our cause is never more in danger than when a human, no longer desiring, but still intending, to do our Enemy’s will, looks round upon a universe from which every trace of Him seems to have vanished, and asks why he has been forsaken, and still obeys.” ― C. S. Lewis

23. “For the Present is the point at which time touches eternity.” ― C. S. Lewis

24. “The Future is, of all things, the thing least like eternity. It is the most temporal part of time—for the Past is frozen and no longer flows, and the Present is all lit up with eternal rays.” ― C. S. Lewis

25. “There is nothing like suspense and anxiety for barricading a human’s mind against the Enemy. He wants men to be concerned with what they do; our business is to keep them thinking about what will happen to them.” ― C. S. Lewis

27. “The game is to have them all running about with fire extinguishers when there is a flood, and all crowding to that side of the boat, which is already nearly gunwale under.” ― C. S. Lewis

28. “There is nothing like suspense and anxiety for barricading a human’s mind against the Enemy. He wants men to be concerned with what they do; our business is to keep them thinking about what will happen to them.” ― C. S. Lewis

29. “The duty of planning tomorrow’s work is today’s duty; though its material is borrowed from the future, the duty, like all duties, is in the Present.” ― C. S. Lewis

30. “An important spiritual law is here involved. I have explained that you can weaken his prayers by diverting his attention from the Enemy Himself to his own states of mind about the Enemy.” ― C. S. Lewis

31. “I have great hopes that we shall learn in due time how to emotionalise and mythologise their science to such an extent that what is, in effect, a belief in us (though not under that name) will creep in while the human mind remains closed to belief in the Enemy.” ― C. S. Lewis

37. “Music. A meaningless acceleration in the rhythm of celestial experience.” ― C. S. Lewis

Iconic The Screwtape Letters quotes about life and the world

42. “Prosperity knits a man to the world. He feels that he is finding his place in it, while really it is finding its place in him.” ― C. S. Lewis

43. “Your patient has become humble; have you drawn his attention to the fact? All virtues are less formidable to us once the man is aware that he has them, but this is specially true of humility.” ― C. S. Lewis

46. “All mortals tend to turn into the thing they are pretending to be. This is elementary.” ― C. S. Lewis

47. “The man who truly and disinterestedly enjoys any one thing in the world, for its own sake, and without caring two-pence what other people say about it, is by that very fact forewarned against some of our subtlest modes of attack.” ― C. S. Lewis

48. “The claim to equality, outside of the strictly political field, is made only by those who feel themselves to be in some way inferior.” ― C. S. Lewis

What did you learn from these The Screwtape Letters quotes?

Common themes in the book include Lewis’ own theological views on things like sex, love, pride, gluttony, and war. Despite the efforts of Screwtape and Wormwood ‘the Patient’ ends up meeting a nice Christian girl, further cementing his faith. He is called to fight in the war, and Wormwood hopes the horrors there will be enough to sway him. However, it is revealed that ‘the Patient’ is killed in action and his soul goes to Heaven.

The Screwtape Letters, which Lewis dedicated to his friend and fellow author, J. R. R. Tolkien, became one of his most popular works. However, Lewis did say that The Screwtape Letters was “not fun” to write and “resolved never to write another ‘Letter.” Despite that, he wrote a short sequel, Screwtape Proposes a Toast, in 1959. Both works are often published together in one book.

Have you read this book before? What are your thoughts on it? Tell us that, and your favorite C. S. Lewis novel in the comment section below.﻿

60 Thomas Paine Quotes That Will Make You Question Your Philosophy