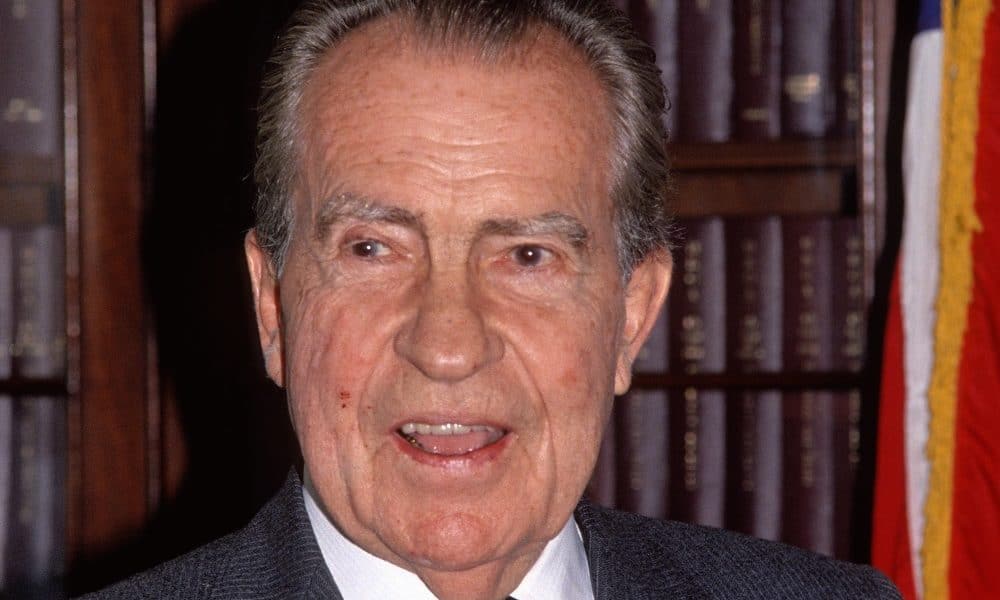 These Richard Nixon quotes help paint a clear picture of the range of events the former president was involved in.

Richard Nixon was the 37th president who served the country for five years from 1969 to 1974. He is most often remembered for his connection to the Watergate scandal and being the first president to resign from the position. However, he also accomplished a lot in his time working up the ranks of the government offices.

Before getting the presidential post, Nixon rose from serving as representative and senator from California to being a vice-president. Throughout his service for the U.S government, Nixon witnessed a number of historical events for the country and the world. This included the U.S.’s involvement in the Vietnam War, agreement with the Soviet Union and China, and the founding of the Environmental Protection Agency.

Don’t forget to also check out these presidential quotes from past presidents.

1. “Federal and state laws (should) be changed to no longer make it a crime to possess marijuana for private use.” – Richard Nixon

2. “The Chinese use two brush strokes to write the word crisis. One brush stroke stands for danger; the other for opportunity. In a crisis, be aware of the danger – but recognize the opportunity.” – Richard Nixon

3. “We are faced this year with the choice between the “work ethic” that built this Nation’s character and the new “welfare ethic” that could cause that American character to weaken.” – Richard Nixon

4. “I played by the rules of politics as I found them.” – Richard Nixon

5. “The average American is just like the child in the family. You give him some responsibility and he is going to amount to something. He is going to do something. If, on the other hand, you make him completely dependent and pamper him and cater to him too much, you are going to make him soft, spoiled, and eventually a very weak individual.” – Richard Nixon

6. “I wouldn’t want to be a Russian leader. You’d never know when you were being taped.” – Richard Nixon

7. “The defining characteristic of today’s intellectual and media elite is that it swims merrily in a sea of fantasy. The world of television is essentially a fantasy world, and television is today’s [1980’s] common denominator of communication, today’s unifying American experience. This has frightening implications for the future. Ideas that fit on bumper stickers are no ideas at all, they simply are attitudes. And attitudinizing is no substitute for analysis. Unfortunately, too often television is to news as bumper stickers are to philosophy, and this has a corrosive effect on public understanding of those issues on which national survival may depend.” – Richard Nixon

8. “There are some instances where you may be ahead of us, for example, in the development of the thrust of your rockets for the investigation of outer space; there may be some instances in which we are ahead of you–in color television, for instance.” – Richard Nixon

9. “If America loses World War III [the Cold War], it will be because of the failure of its leadership class. In particular, it will be because of the attention, the celebrity, and the legitimacy given to the ‘trendies’–those over-glamorized dilettantes who posture in the latest idea, mount the fashionable protests and are slobbered over by the news media, whose creation they essentially are. The attention given to them and their ’causes’ romanticizes the trivial and trivializes the serious. It reduces public discussion to the level of a cartoon strip. These trendies are ready with an opinion at the drop of a microphone, and their opinions are treated as news–not because they are authorities, but because they are celebrities.” – Richard Nixon

10. “When the president does it, that means it is not illegal. Actions that otherwise would be unconstitutional could become lawful if undertaken for the purpose of preserving the Constitution and the nation. This nation was torn apart in an ideological way by the war in Vietnam, as much as the Civil War tore apart the nation when Lincoln was president.” – Richard Nixon

11. “The independence of Ukraine is indispensable. A Russian-Ukrainian confrontation would make Bosnia look like a Sunday school picnic. Moscow should be made to understand that any attempt to destabilize Ukraine – to say nothing of outright aggression – would have devastating consequences for the Russian-American relationship. Ukrainian stability is in the strategic interest of the United States.” – Richard Nixon

12. “The presidency has many problems, but boredom is the least of them.” – Richard Nixon

13. “Because our strengths are so great, we can afford to appraise our weaknesses with candor.” – Richard Nixon

16. “When the President does it, that means that it is not illegal.” – Richard Nixon

20. “I was not lying. I said things that later on seemed to be untrue.” – Richard Nixon

23. “Some of the peoples of Africa have been out of trees for only about 50 years.” – Richard Nixon

24. “Only a few short weeks ago, we shared the glory of man’s first sight of the world as God sees it, as a single sphere reflecting light in the darkness. … In that moment of surpassing technological triumph, men turned their thoughts toward home and humanity, seeing in that far perspective that man’s destiny on earth is not divisible.” – Richard Nixon

26. “If you want to make beautiful music, you must play the black and the white notes together.” – Richard Nixon

28. “Only if you have been in the deepest valley, can you ever know how magnificent it is to be on the highest mountain.”- Richard Nixon

29. “The finest steel has to go through the hottest fire.” – Richard Nixon

30. “Always remember, others may hate you, but those who hate you don’t win unless you hate them, and then you destroy yourself.” – Richard Nixon

31. “Always give your best. Never get discouraged. Never be petty.” – Richard Nixon

32. “Solutions are not the answer.” – Richard Nixon

33. “I know you think you believe you understand what you thought I said, but I am not sure you realize that what you heard is exactly what I meant.” – Richard Nixon

34. “I really believe life is simple. It’s all the other people that make things complicated.” – Richard Nixon

35. “Those that hate you don’t win until they get you to hate them. Then you destroy yourself.” – Richard Nixon

36. “When I grow up, I want to be an honest lawyer so things like that can’t happen.” – Richard Nixon

37. “The finest steel must go through the hottest fire.” – Richard Nixon

38. “What starts the process, really, are the laughs and snubs and slights you get when you are a kid. Sometimes, it’s because you’re poor or Irish or Jewish or Catholic or ugly or simply that you are skinny. But if you are reasonably intelligent and if your anger is deep enough and strong enough, you learn that you can change those attitudes by excellence, personal gut performance, while those who have everything are sitting on their fat butts.” – Richard Nixon

41. “If I had feelings, I probably wouldn’t have even survived.” – Richard Nixon

42. “If you want to make beautiful music, you must play the black note and the white notes together.” – Richard Nixon

44. “History will treat me fairly. Historians probably won’t, because most historians are on the left.” – Richard Nixon

45. “Always give your best, never get discouraged, never be petty; always remember, others may hate you, but those who hate you don’t win unless you hate them, and then you destroy yourself.” – Richard Nixon

46. “So you are lean and mean and resourceful and you continue to walk on the edge of the precipice because over the years you have become fascinated by how close you can walk without losing your balance.” – Richard Nixon

47. It’s a piece of cake until you get to the top. You find you can’t stop playing the game the way you’ve always played it because it is a part of you and you need it as much as you can do an arm or a leg. So, you are lean and mean and resourceful and you continue to walk on the edge of the precipice because over the years you have become fascinated by how close to the edge you can walk without losing your balance.” – Richard Nixon

48. “Any change is resisted because bureaucrats have a vested interest in the chaos in which they exist.” – Richard Nixon

49. “I know you believe you understand what you think I said, but I am not sure you realize that what you heard is not what I meant.” – Richard Nixon

What did you learn from these Richard Nixon quotes?

A word that comes to mind when most people think of the Nixon presidency is “controversy”. While Nixon accomplished some key things for the country while president, his involvement in the Watergate Scandal forever marred his legacy.

There was no denying his involvement in the scandal and with a certain impeachment coming, he resigned as leader of the United States. However, there was more to him than that. His previous actions showed his focus on education, peace, and unity among nations.

How you feel about his performance overall will largely depend on your opinion of the political parties. But regardless, some of the quotes above are things that everyone can agree with.

What’s your biggest takeaway from these Richard Nixon quotes and sayings? Do you have any other favorite quotes to add? Let us know in the comment section below.

Discovering Pleasure in Movement Instead of Exercising from Fear