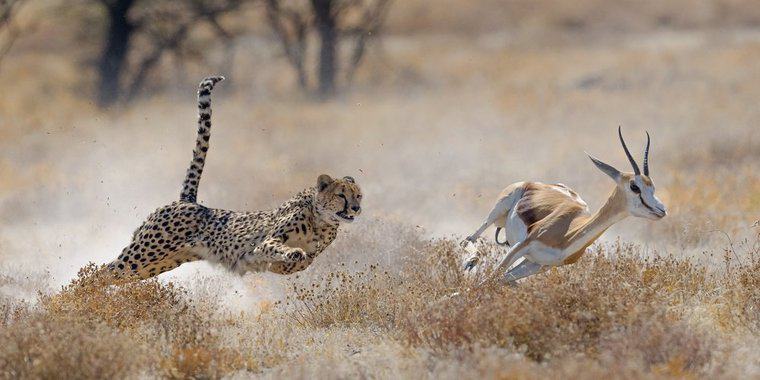 Just say the word predator, and people will instantly start thinking of different things. Say predator to a man around the age of 40 and they will likely think you are talking about the film from 1987. It is a classic 80s action/sci-fi film, starring Arnold Schwarzenegger and Jesse Ventura. These predator quotes include some great lines from the cast of Predator (including the one my husband yells, in a horrible Aussie accent, when he would like us to go faster…). If you were to say ‘predator’ to an animal lover they might instantly think of the Irwins and other nature shows that highlight the predators of the animal kingdom.

Animal predators come in many different shapes and sizes, and not all appear threatening. For instance, a cat is a predator of mice, but neither of those animals strikes fear into my heart. Then there are apex predators, which means they are the predator at the top of the food chain, and rarely have a natural predator of their own. These include animals like big cats, sharks, orcas, and crocodiles, none of which I would really want to face off with!

Many educational and witty predator quotes from this list are about apex predators. There is one other type of apex predator that also made the list, and that is humans. Keep reading to learn more about the predatory instincts of animals and humans.

1. “What’s the matter, CIA got you pushing too many pencils?” — Dutch, Arnold Schwarzenegger

2. “Get to the choppa!” — Dutch, Arnold Schwarzenegger

3. “I see you.” [To the predator cloaked in invisibility] — Mac, Bill Duke

4. “Stick around.” [After Dutch uses his machete to impale an enemy to the wall] — Dutch, Arnold Schwarzenegger

5. “I don’t care who you are back in the real world. You give our position away one more time and I’ll bleed ya, real quiet. Leave ya here, got that?” — Mac, Bill Duke

6. “Come on! Kill me!” [Yelled as Dutch is wounded in an attempt to get the Predator to set off a trap] — Dutch, Arnold Schwarzenegger

8. “There’s something out there waiting for us, and it ain’t no man. We’re all gonna die.” — Billy, Sonny Landham

9. “What the hell are you.” [Dutch asks the Predator, and the Predator mimics it back while dying] — Dutch, Arnold Schwarzenegger

11. “A lion’s work hours are only when he’s hungry; once he’s satisfied, the predator and prey live peacefully together.” — Chuck Jones

13. “A boxer is like a lion, the greatest predator on land, but you throw him in the shark tank and he’s just another meal.” — Renzo Gracie

15. “Lions are neither predators nor killers. They just go for hunting like kings; because they are the kings!” — Munia Khan

16. “The lion and the calf shall lie down together but the calf won’t get much sleep.” — Woody Allen

18. “A tiger does not shout its tigritude, it acts.” — Wole Soyinka

20. “There is nothing like the thrill of walking through the jungle looking for a tiger and knowing they could be watching you already.” — Ashlan Gorse Cousteau

Best Predator quotes about the dangers and evils of humans

21. “The predator wants your silence. It feeds their power, entitlement, and they want it to feed your shame.” — Viola Davis

22. “There’s a marked difference between a sexual predator, coercion tactics, and a man hitting on someone with the intention dating/wanting to get to know a girl he likes, however awkward, unpolished it may be.” — Chinmayi

23. “I don’t think anyone can be more of a predator than a human being.” — Robert Rodriguez

24. “I think the default position of humans is to be terrible, and we have to train it out of our children. That’s just part of survival, right? Predator animals don’t survive by being nice; humans are basically predator animals.” — Wil Wheaton

25. “Violence wounds the body, and it wounds the soul. Of the predator. Of the prey. Of the mourners. Of collective humanity. It diminishes us all.” — Kathy Reichs

26. “That people will object very much to seeing a predator killing its prey, and yet, in the news, will accept showing shots of people shooting one another.” — David Attenborough

27. “He was a killer, a thing that preyed, living on the things that lived, unaided, alone, by virtue of his own strength and prowess, surviving triumphantly in a hostile environment where only the strong survive.” — Jack London

28. “Only the cruelest hunters set their traps with terror and trepidation.” ― Nenia Campbell

29. “When we’re thrown into this world, we all start out as prey. If you’re lucky someone protects you, if you’re not then your parents or family become your first experience with predators.” ― Jesse James Kennedy

30. “A predator’s intention… It is my intention to cause you fear, such as you have never known. It is my desire to take your fear to a whole new level of terror.” ― Suzanne Steele

31. “Without sharks, you take away the apex predator of the ocean, and you destroy the entire food chain.” ― Peter Benchley

32. “The shark is the apex predator in the sea. Sharks have molded evolution for 450 million years. All fish species that are prey to the sharks have had their behavior, their speed, their camouflage, their defense mechanisms molded by the shark.” ― Paul Watson

33. “People need to look at wildlife conservation in its totality. As soon as you lose the apex predator, it has harmful consequences right down the food chain.” ― Thomas Kaplan

34. “Crocodiles are an apex predator and crucial to the ecosystem, keeping waterways and wetlands healthy. Crocodiles eradicate the weak, sick, and injured wildlife, leaving only the healthy to prosper.” ― Terri Irwin

35. “The rapidly spinning blades of wind turbines act like an apex predator that big birds never evolved to deal with. And because big birds have much lower reproductive rates than small birds, their deaths have a far greater impact on the overall population of the species.” ― Michael Shellenberger

36. “So, my tactic with conservation of apex predators is to get people excited and take them to where they live.” ― Steve Irwin

37. “Remove the predators, and the whole ecosystem begins to crash like a house of cards. As the sharks disappear, the predator-prey balance dramatically shifts, and the health of our oceans declines.” ― Brian Skerry

39. “Look at my big teeth. I’m an apex predator. My genetic material is awesome.” ― Ilona Andrews

40. “My field is with apex predators, hence your crocodiles, your snakes, your spiders.” ― Steve Irwin

41. “I think anybody with an insecurity, which is everyone, appreciates the fact that it’s much easier to be a predator than it is to be prey.” ― James Van Der Beek

42. “Death is the one predator we can’t escape.” ― Sherrilyn Kenyon

43. “When caught in the clutches of a predator, the jelly produces a light display that is a pinwheel of light that is basically a call for help. It serves to attract the attention of a larger predator that may attack their attacker, thereby affording them an opportunity for escape.” ― Edith Widder

44. “The number one piece of advice that you would ever get with working with any large predator is don’t run. If you stand confident up in its face, it’ll probably just wander away, but if you turn and run, it triggers what’s known as the predatory impulse.” ― Steve Backshall

47. “The night belongs to beasts of prey and always has. It’s easy to forget that when you are indoors, protected by light and solid walls.” ― Cornelia Funke

48. “In sleep, you are safe from the revolting mechanics of living and being prey to outrageous fortune.” ― Taylor Caldwell

50. “The way to reason with a predator is to make it aware that it can live in a cage, or it can die, but it can no longer prey upon us.” ― Massad Ayoob

What did you learn from these predator quotes?

The internet is vastly divided on just which apex predator is the strongest. Some people answer with things like the lion, the killer whale, or the saltwater crocodile.

Each of these deadly creatures has ample reasons to be considered the strongest apex predator, but ultimately, you will have to answer that question for yourself. One thing that can not be denied is that each of these animals possesses what is known as the predatory instinct in spades.

In animals, the predatory instinct means they survive by killing other animals for their food. They stalk their prey and hunt them down. Oftentimes, they outsmart their prey, while other times they overpower them by sheer brute and force.

Humans are arguably one of the strongest predators out there because some of us excel at that type of behavior. Sure, there are many humans that do not fit the bill of predator in their everyday lives but is that because of societal constraints like ethics and morality?

If it was truly a kill or be killed world, humans would have no problems tapping into the predator instincts to survive. Then there are those humans who have no problem being emotional and sexual predators. These are the worst because they usually hide under a veneer of charisma and are well-liked.

Which predator do you think is the top dog? Let us know in the comment section below, and if you have any other favorite quotes and lines from Predator that didn’t make the list, feel free to share those as well!