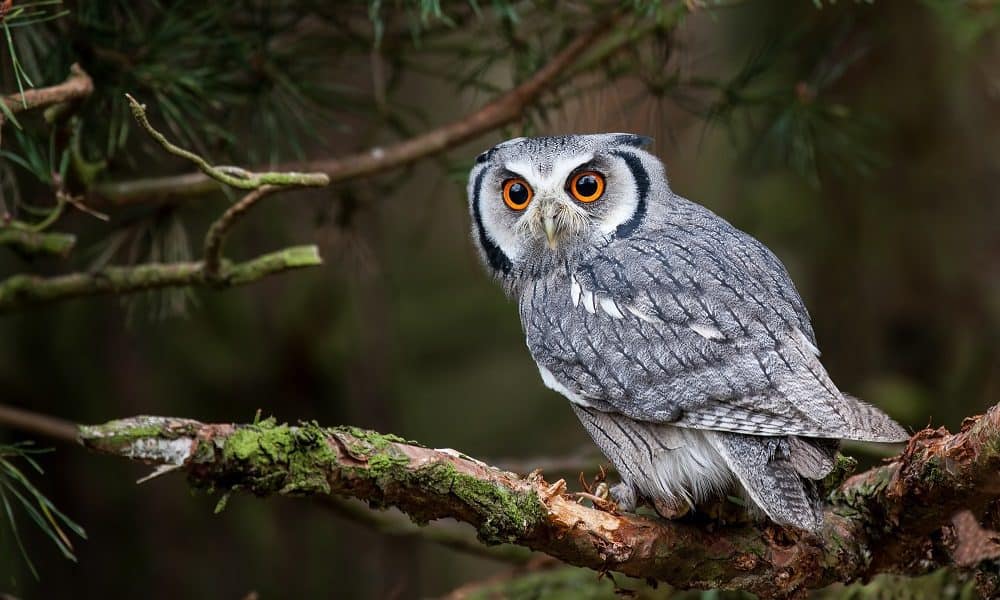 Owls have got to be the cutest birds out there! They are so fluffy, and who wouldn’t love those big expressive eyes! Beyond being cute, their species is known for being a silent night predator. Their lack of sound has a lot to do with their feathers.

They have special feathers that help break turbulence into smaller currents, which reduces the sound made when flying. Their soft down (the reason they look fluffy) also helps to muffle and absorb sound. You can learn more about them coming out at night from these night owl quotes!

What are some more unusual things about owls?

The unique ability that all owls have, regardless of their species, is the ability to turn their heads 270 degrees. This is due to the extra 7 vertebrae they have! Owls have 14 vertebrae in their neck, while other birds typically have only 7.

Those adorably large eyes are also unique in the sense that they are completely immobile and tube-shaped. Owls also have excellent vision, which helps them hunt at night. Keep reading through these owl quotes to learn if owls are really as smart as we think they are.

Don’t forget to also check out these bird quotes that will fill your mind with thoughts of flying and freedom.

Poetic owl quotes for the soul

1. “Do not trap yourself into an owl’s hooting sound, where sad nights linger through the blackness of a hound.” — Munia Khan

4. “The large white owl that whose eye is blind, that hath sate for years in the old tree hollow, is carried away in a gust of wind.” — Elizabeth Barrett Browning

5. “Alone and warming his five wits, the white owl in the belfry sits.” — Alfred, Lord Tennyson

6. “Have you ever stared into the owl’s eyes? They blink slow, then burn: burn gold in the dark inner core of the snow-shrouded cedar.” — Robert Penn Warren

7. “The large white owl that with eye is blind, that hath sate for years in the old tree hollow, is carried away in a gust of wind.” — Elizabeth Barret

8. “Only the worm of conscience consorts with the owl. Sinners and evil spirits shun the light.” — Friedrich Schiller

9. “The screech-owl, with ill-boding cry, portends strange things, old women say; stops every fool that passes by, And frights the school-boy from his play.” — Lady Mary Wortley Montagu

10. “If we cannot sing of faith and triumph, we will sing our despair. We will be that kind of bird. There are day owls, and there are night owls, and each is beautiful and even musical while about its business.” — Henry David Thoreau

Wise Owl quotes about their wisdom, intelligence and being nocturnal

11. “An owl is traditionally a symbol of wisdom, so we are neither doves nor hawks but owls, and we are vigilant when others are resting.” — Urjit Patel

12. “An owl is the wisest of all birds because the more it sees the the less it talks.” — Christie Watson

13. “Owls are wise. They are careful and patient. Wisdom precludes boldness. That is why owls make poor heroes.” — Patrick Rothfuss

14. “To be honest, owls aren’t the brightest of birds, amazing as they are; parrots and crows are much smarter. It’s all in the eyes: those magnificent piercing optics are what make all owls look like they are deep in concentrated scrutiny and steeped in long-lost knowledge.” — Matt Sewell

15. “An owl is traditionally a symbol of wisdom, so we are neither doves nor hawks but owls, and we are vigilant when others are resting.” — Urjit Patel

16. “No owl is afraid of the night, no snake of the swamp and no traitor of the treason.” — Unknown

17. “Some men pray only when the world is dark, as owls hoot at night.” — Austin O’Malley

18. “The owl is nocturnal with keen senses of sight and sound. It sees through the shadows of the night and hears the sounds in the silence; the illusion of the darkness. This teaches us to see past our own illusions and trust our intuition and perceptive senses.” — Anonymous

19. “People say the darkness is where secrets are best hidden. Nighttime brings clarity and focus to owls, even if the aperture of this vision comes with a stigma.” — Kimberly Morgan

Owl quotes from Shakespeare and other writers

21. “The clamorous owl that nightly hoots and wonders At our quaint spirits.” — William Shakespeare

22. “Thou ominous and fearful owl of death.” — William Shakespeare

23. “The night to the owl and morn to the lark less welcome.” — William Shakespeare

24. “The owl by day, if he arise, is mocked and wondered at.” — William Shakespeare

27. “‘Owl,’ said Rabbit shortly, ‘you and I have brains. The others have fluff. If there is any thinking to be done in this Forest–and when I say thinking I mean thinking–you and I must do it.’” ― A.A. Milne

29. “Rabbit and Owl are aging bachelors whose respective megalomania and fussiness are tempered only by their mutual friendship, of which the less said, the better.” ― Frederick C. Crews

30. “Owls are known as lonely birds; but it is not known that they have the forest as their best friend!” — Mehmet Murat Ildan

33. “I used to think I was a night owl. I realized I’m not, because I have energy at night, but I’m not as focused and productive when I try to get things done.” — Caroline Ghosn

34. “I’m a night owl; I could work until 6 in the morning without even thinking about it.” — Julie Plec

35. “I generally stay with a chapter until I am satisfied, do very little rewriting, and if a scene is going well, I’ve been known to keep night owl hours.” — Sharon Kay Penman

36. “I’m the worst night owl, because I’m a self-loathing night owl who thinks, ‘No, I should be getting up early.’ It feels unproductive. I must get over that.” — Ronny Chieng

37. “I’m a bit of a night owl, I’m always visiting the gym throughout the night.” — Jimi Manuwa

39. “I’m a night owl, and luckily my profession supports that. The best ideas come to me in the dead of night.” — Josh Fox

41. “It was a lot like working at Hogwarts, except that, instead of receiving letters from our owls, we would find coughed-up owl pellets in our coffee mugs.” ― Stacey O’Brien

42. “In their previous lives, poets were bats, and thinkers were owls.” ― Michael Bassey Johnson

44. “My friends call me an owl. Apparently, it’s a combination of being wise and having big eyes.” ― Romy Madley Croft

45. “The crow wished everything was black, the owl, that every thing was white.” — William Blake

47. “You don’t need anything but hope. The kind of hope that flies on silent wings under a shining owl moon.” ― Jane Yolen

48. “Advice from an owl: stay focused, be “whoo” you are, trust in a wise friend, live off the land, glide through the dark times, be observant, life’s a hoot!” ― Ilan Shamir

What did you learn from these motivational owl quotes?

Most of us have heard the saying “wise old owl,” and if you are a Winnie The Pooh fan, then you know that Owl likes to think he knows just about everything there is to know.

However, are owls truly as smart as we think they are? Well, unlike their eyes, their brains are not very large. They also don’t belong to the social groups of birds known for their intelligence, like crows.

Most likely, people assigned a human quality to the owl because of their human-like appearance. Then characters like A. A. Milne’s owl, and the owl from Harry Potter reinforced the myth. However, parrots and crows are actually smarter, even though the owl is a much better hunter.

The brain of the parrot and crow is large compared to their size, while the owl’s behavior is more adaptive thanks to their hunting abilities. Sadly, the owl is not the Einstein of birds, like you might have believed.

Do you have a favorite fictional owl? Or maybe owl quotes and sayings that didn’t make the list? You can share your thoughts with us in the comment section below!

50 One Direction Quotes From The Heartthrob Boy Band Group

15 Simple Ways to Spread Happiness and Kindness Around You