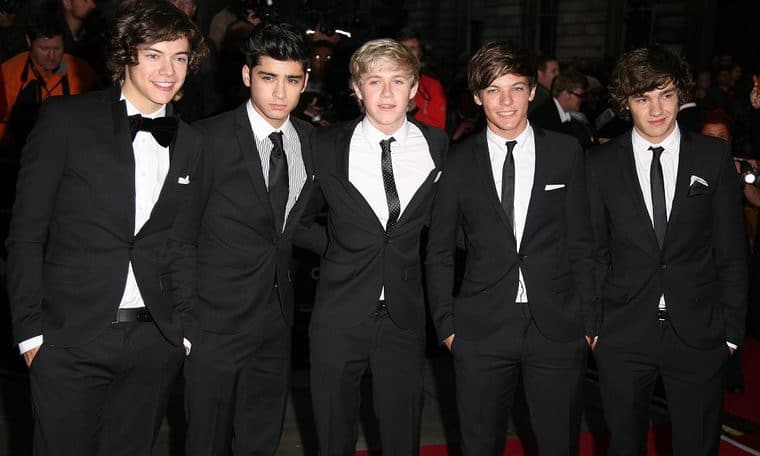 These One Direction quotes come from the group’s most popular hit songs, as well as the boys themselves.

True One Direction fans, or Directioners, as they are often called will know that this band was formed by accident (or maybe it was fate) in 2010, thanks to the TV show, The X Factor. Niall Horan (the only Irish member of the group), Zayn Malik, Liam Payne, Harry Styles, and Louis Tomlinson were all eliminated early in the show’s “boys” category, where they competed as soloists.

Just whose idea was it to take these eliminated contestants and turn them into one of the most successful boy bands in the history of boy bands? That honor has been claimed by both Simon Cowell and Nicole Scherzinger, although it was Simon Cowell’s label that signed the boys after the group came in third place on the show.

The group has released five albums, so there were quite a few songs to pick from but these are the ones that made the cut: Little Things, Best Song Ever, One Thing, Little Black Dress, Diana, 18, Where Do Broken Hearts Go, They Don’t Know About Us, and Stole My Heart.

Where is the band now, and what are the members of 1D (the nickname for One Direction) up to now? Keep reading these One Direction quotes to learn more.

Don’t forget to also check out these Harry Styles quotes to inspire and encourage you in life.

1D quotes from some of their most popular hits

1. “Your hand fits in mine like it’s made just for me.” —‌ One Direction, Little Things

2. “We danced all night to the best song ever.” —‌ One Direction, Best Song Ever

4. “Little black dress, I won’t do you no harm.” —‌ One Direction, Little Black Dress

5. “Let me be the one one to light a fire inside those eyes.” —‌ One Direction, Diana

7. “All the rest of my crimes don’t come close to the look on your face when I let you go.” —‌ One Direction, Where Do Broken Hearts Go

9. “Under the lights tonight, you turned around, and you stole my heart.” —‌ One Direction, Stole My Heart

10. “A dream is only a dream until you decide to make it real.” —‌ Harry Styles

11. “Swallow your fears, wipe off your tears, let go of your darkest years. Chin up. Smile. Walk away.” —‌ Harry Styles

12. “I’d like to take care of someone, but at the same time, I like girls who are independent.” —‌ Harry Styles

13. “I like things that involve skill and I love anything that’s a bit of a challenge.” —‌ Harry Styles

15. “I wouldn’t say I could fall in love at first sight, but maybe I just haven’t done that yet.” —‌ Harry Styles

16. “I’ve always wanted to be one of those people who didn’t really care much about what people thought about them, but I don’t think I am.” —‌ Harry Styles

17. “If one heart fits another like a puzzle piece, maybe you could be the missing half of me.” —‌ Harry Styles

19. “A lot of the time, the way it’s portrayed is that I only see women in a sexual way. But I grew up with just my mum and sister, so I respect women a lot.” —‌ Harry Styles

20. “If you’re going to get in trouble for hitting someone, might as well hit them hard.” —‌ Harry Styles

22. “I wish I had a girl to cuddle up with at night instead of my pillow.” —‌ Harry Styles

24. “I think you should not be scared of embarrassing yourself. I think it builds character.” —‌ Harry Styles

Funny One Direction quotes and sayings from Zayn

26. “Life is funny. Things change, people change, but you will always be you, so stay true to yourself and never sacrifice who you are for anyone.” —‌ Zayn Malik

27. “No matter how many times people try to criticize you, the best revenge is to prove them wrong.” —‌ Zayn Malik

28. “There comes a day when you realize turning the page is the best feeling in the world.” —‌ Zayn Malik

29. “There’s so much more to the book than the page you were stuck on.” —‌ Zayn Malik

30. “Just because you don’t have a prince, doesn’t mean you’re not a princess.” —‌ Zayn Malik

31. “I don’t need the perfect one, I just need someone who will make me feel like I’m the only one.” —‌ Zayn Malik

33. “It’s important to be yourself and be happy with who you are because that’s what makes you unique.” —‌ Zayn Malik

34. “Without the fans, there’s no reason to be One Direction.” —‌ Zayn Malik

One Direction quotes from Niall and Liam

35. “I won’t date a model, because models are perfect and perfect is boring.” —‌ Niall Horan

37. “I’m the kind of boy that can fall in love with any girl because I love with the heart, not the eyes.” —‌ Niall Horan

39. “I’m the kind of boy that can fall in love with any girl because I love with the heart, not the eyes.” —‌ Niall Horan

40. “Dreams are like stars. You may never touch them, but if you follow them, they will lead you to your destiny.” —‌ Liam Payne

41. “The worst thing a boy could do to a girl, personally, I think, is to ignore her for a while whilst she’s loving you with all her heart.” —‌ Liam Payne

42. “The most valuable lessons in life cannot be taught, they must be experienced.” —‌ Liam Payne

43. “Whenever I’m sad I just imagine if babies were born with mustaches.” —‌ Liam Payne

Inspirational One Direction quotes from Louis

44. “Call me old fashioned, but I’d like to get to know a girl before I start a relationship.” —‌ Louis Tomlinson

45. “Some would call our fans crazy, but we think they’re passionate.” —‌ Louis Tomlinson

46. “We’re not perfect, we’re not clean cut. We’re just trying to be ourselves.” —‌ Louis Tomlinson

47. “If you want to do something, go for it. You’ve got nothing to lose.” —‌ Louis Tomlinson

48. “Live life for the moment, because everything else is uncertain.” —‌ Louis Tomlinson

49. “I will confess I am a great wingman. Since I have a girlfriend, I’ll start the night with her, but then I’ll help out the guys by making them sound like the most incredible guys in the world.” —‌ Louis Tomlinson

50. “I want my first son to be called ‘Tommy.’ It will sound great, Tommy Tomlinson” —‌ Louis Tomlinson

Which of these One Direction captions is your favorite?

The band’s popularity exploded with the release of their successful first album, Up All Night. The band followed that album with two insanely popular singles from their second album, Take Me Home. In 2014, the group released their fourth album and started their fourth world tour. The album was appropriately called Four, however, it might have been a bit prophetic.

Louis Tomlinson was reported saying that the hiatus would last about 18 months. By 2017, the group was still not back together, and all four members had moved on and begun working on other projects. There have been rumors that the band is getting back together, spurred by some Instagram posts from Niall Horan, but at the time of this article, nothing has been confirmed.

Despite the break-up though, all the members of the band have done well on their own. Harry Styles and Niall Horan have certainly reached the solo pop star status they sought back on that season of The X Factor. If you are wondering, Harry Styles has the highest net worth of any of the members.

Did you enjoy these One Direction quotes and sayings? Tell us who your favorite band member is and if you think they will be getting back together, in the comment section below.

5 Types of Questions We Should All Ask Ourselves

80 Introvert Quotes About Surviving in an Extroverted World (2021)