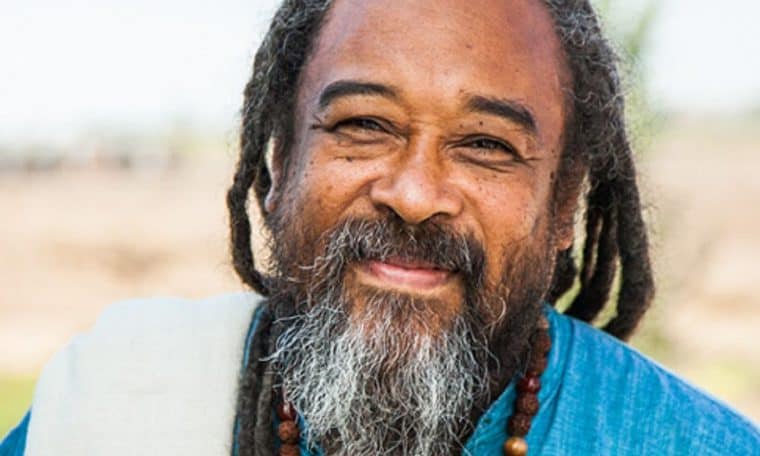 Anthony Paul Moo-Young, who goes by the name Mooji, is a 67-year-old Jamaican spiritual teacher. He talks (Satsang) and his retreats are based out of Portugal, where he lives, and the UK.

But just who is he? When did he start to have such a following of people and what does he talk about? Reading through some of these Mooji quotes you might also wonder what religion he is, or if he follows a specific religion at all.

Let’s start with who he is, and answer the rest of these questions later and even in his own words.

Mooji is a survivor of a difficult childhood, as so many other people are, which is probably part of the reason people find him so inspiring. His mother left him to move to the UK when he was one year old. His father and his mother’s cousin (who later became his father’s lover and mother of Mooji’s siblings) raised him until the age of 8.

Following his father’s death, Mooji was raised by a strict uncle when he was a teenager and relocated to London to live with his mother. 30-year-old Mooji was a street artist trying to support his wife and child.

Mooji’s siblings would also play a role in his life and philosophy. In 1985, Mooji’s sister, Cherry Groce, was shot and paralyzed when the police raided her home. This incident sparked the 1985 Brixton Riot. A few years later, in 1987, Mooji encountered a Christian, which was the start of his spiritual quest.

Keep reading for Mooji quotes about life, the mind, and spirituality.

Don’t forget to also check out these spiritual quotes about inner peace and love.

1. “Step into the fire of self-discovery. This fire will not burn you, it will only burn what you are not.” ― Mooji

2. “Life supports the physical, emotional, mental, and spiritual needs of the one who is open to self-discovery. Trust opens your eyes to the recognition of this. Surrender allows you to merge in your own eternal being.” ― Mooji

3. “Once you begin to recognize the divine gifts in life, you come to see that there are so many. Your life is abundant.” ― Mooji

4. “Live by the light of your own heart… but make sure this heart is silent and empty.” ― Mooji

5. “It does not matter what comes up. What matters is who you are, the one perceiving it.” ― Mooji

6. “Don’t try to create some kind of shape for your life as if you are shearing it with a pair of clippers. Don’t prune down your own life into the shape you think it should be. Don’t be a bonsai, be a mighty oak.” ― Mooji

7. “Give yourself a little time to grow in wisdom, to mature in understanding.” ― Mooji

9. “Go to the source—you don’t have far to go. You don’t have to take even a single step, because it’s all here right now.” ― Mooji

Mooji quotes about how to be successful and maintain happiness

12. “I don’t have to be anything at all. I don’t even have to be myself, because there is no such thing as not being myself. I am inescapably myself.” ― Mooji

13. “Never assume that you have attained truth. Don’t make any claim to knowledge. Form no conclusion or evaluation concerning truth. The minute you do, your downfall is assured.” ― Mooji

14. “Don’t be a storehouse of memories. Leave past, future, and even present thoughts behind. Be a witness to life unfolding by itself. Be free of all attachments, fears, and concerns by keeping your mind inside your own heart.” ― Mooji

15. “Rest in being. Like this, your life is always fresh and imbued with pure joy and timeless presence. Be happy, wise, and free.” ― Mooji

16. “Discovering your true nature doesn’t require that you suffer hardships or give up the things you enjoy.” ― Mooji

17. “Know this: you never have to apologize for your existence. You are not here by accident but by the will and love of the Supreme Lord of the universe.” ― Mooji

18. “You need nothing to be happy, but you need something to be sad.” ― Mooji

19. “If you seek approval from others in this world, you will not know happiness.” ― Mooji

20. “The greatest step towards a life of happiness and simplicity is to let go. Trust in the power that is already taking care of you spontaneously, without effort.” ― Mooji

21. “Dying to your own attachments is a beautiful death. Because this death releases you into real life. You have to die as a seed to live as a tree.” ― Mooji

22. “Surrender is not a weakness it is strength. It takes tremendous strength to surrender life to the supreme – to the cosmic unfolding.” ― Mooji

23. “Whenever you imagine you know something, you cease being open to the living exploration. You have closed a door and cut off the oxygen to the breathing truth.” ― Mooji

24. “Throw everything away, forget about it all! You are learning too much, remembering too much, trying too hard… relax a little bit, give life a chance to flow its own way, unassisted by your mind and effort. Stop directing the river’s flow.” ― Mooji

25. “If you take yourself to be the body and mind only, you will die! When you discover yourself as awareness, the fear of death will not trouble you any longer.2 ― Mooji

26. “Life itself, as is fashioned inside the human psyche is unreal. Death too, as is imagined based upon the ill-conceived notion that we are merely our bodies and personalities, is unreal. All is illusion—unreal. The Self, timeless and spaceless, immutable, beyond all qualities, alone is real.” ― Mooji

27. “When you live guided by intuition rather than thought, your life dances like writing on water, fresh and untraceable.” ― Mooji

28. “Life cannot be against you, for you are life itself. Life can only seem to go against the ego’s projections, which are rarely in harmony with the truth.” ― Mooji

29. “You ask: How to live my life? But with that question you are suffocating life itself, for life is spontaneity.” ― Mooji

Mooji quotes about love and other emotions

33. “You will arrive at the realization that you are just joy itself, and everything you do arises out of this joy, out of this spaciousness, light, and love.” ― Mooji

34. “Everything is magical when you see it with your heart.” ― Mooji

35. “Can you imagine being in a place inside of yourself where you genuinely don’t need to be loved? It’s a very quiet place in which your love becomes open, broad, beautiful, and strong.” ― Mooji

36. “You can lose everything else, but you can never lose the awareness that you are. It is the consciousness of Being and Self-awareness that we love.” ― Mooji

37. “If you wish to find love, don’t look for the object of love but rather for the source of love. There you will find the beloved.” ― Mooji

39. “Your mind loves things, but your being just loves to be.” ― Mooji

Mooji quotes about the mind and spirituality

41. “There is a presence, a silence, a stillness which is here by itself. There is no doer of it, no creator of this stillness. It is simply here in you, with you. It is the fragrance of your own self.” ― Mooji

42. “There is nothing to do about this, it is naturally present. This fragrance of peace, this spaciousness, it is the fragrance of your own being.” ― Mooji

43. “You are the unchanging manifesting as the changefulness.” ― Mooji

43. “As your Satsang deepens, the debris starts floating to the surface bringing much discomfort to the body-mind. Now is not the time for therapy or analysis. Simply leave it to the Sovereign Power whose benevolence washes away all delusion. Remember this!” ― Mooji

44. “You have to see and meet God in this life. Don’t let this life go by and miss discovering the Supreme One. You will find him inside as your constant being.” ― Mooji

45. “The ways of the mind are ancient but your Self is timeless.” ― Mooji

46. “Ultimately, there are no dialogues in the world; it is all a divine monologue.” ― Mooji

47. “Attempting to understand consciousness with your mind is like trying to illuminate the sun with a candle.” ― Mooji

48. “You have the innate power to discern that a presence is arising within you that is not the mind. The Divine is giving you a kiss from within. And even a lightly blown kiss from God will be enough to stir you into embarking upon the search for freedom. That kiss will set your heart on fire!” ― Mooji

50. “Just as you wash your hands before eating, clear your mind before engaging with the world.” ― Mooji

What did you learn from these Mooji quotes?

Mooji continued to follow his love of art and worked as an art teacher until 1993. He quit teaching and traveled to India, where he attended the Satsangs of the Indian guru Papaji. He wasn’t in India long before tragedy struck Mooji’s life again.

This time, it was his son’s death due to pneumonia. He continued traveling between India and Brixton, where he would give away his “thoughts of the day” which he rolled up in McDonald’s straws. Were these thoughts based on religion? Possibly, although he didn’t become a spiritual teacher until 1999.

Mooji practices Advaita, a popular Hindu philosophy that says, ‘a person’s inner self is the only real and conscious part of them and that recognizing this will bring one closer to the true state.’ He was approached by a group of spiritual seekers who became his students. He also started to write books, produce CDs, and videos based on his teachings.

Mooji has said, in regards to the path his life took, “What can I say, except that’s life.” Mooji’s brother Peter (a tabletop tennis pro in Jamacia) said that people had always followed him wherever he went.

Mooji claims his teachings are the easy path to enlightenment. This leads people like Rationalist Sanal Edamaruku to argue that western gurus like Mooji ‘promote a simple formula that appeals to gullible people seeking an easy awakening.’

What do you think? Is there an easy path to the truth and awakening? Is that something you follow and practice, or do you just take bits and pieces and adopt them into your everyday thinking? Share your thoughts in the comment section below, along with any other favorite Mooji quotes and sayings.

50 Baby Girl Quotes That Will Have You Cherishing Your Daughter