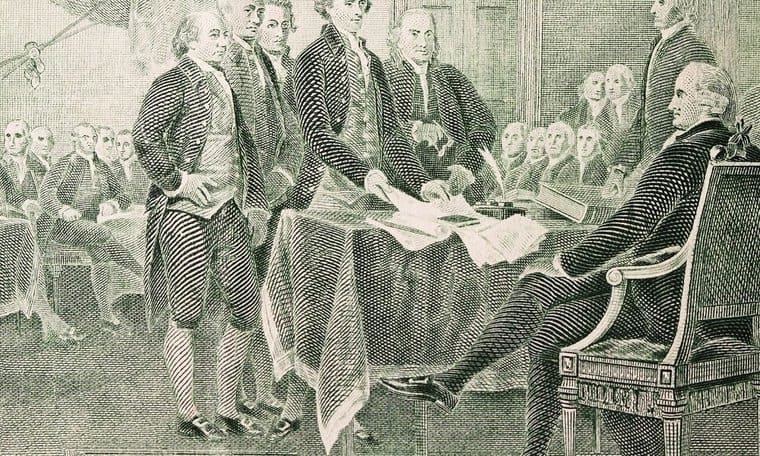 These liberty quotes from the founding fathers and other great patriots show the true meaning of freedom.

The road to liberty in the United States has not been an easy one. While on July 4, 1776, our founding fathers claimed several fundamental rights, “Life, Liberty, and the pursuit of Happiness,” as we all know, there were several loopholes in the original declaration.

First of all, women were not included in the original paperwork, and neither were people of color. It has been 245 years since the original members of Congress signed that paper and we’ve made many important strides towards true liberty.

The Civil Rights Act of 1964 and the Freedom to Marry in 2015 were major milestones in the American pursuit of liberty. However, there is still work to be done.

May these liberty quotes inspire you to continue to strive for true liberty, freedom, and equality for all.

Don’t forget to also check out these freedom quotes on destiny, leadership, and independence.

Liberty quotes from the founding fathers

1. “They who can give up essential liberty to obtain a little temporary safety deserve neither liberty nor safety.” – Benjamin Franklin

2. “No people will tamely surrender their Liberties, nor can any be easily subdued, when knowledge is diffused and Virtue is preserved.” — Samuel Adams

3. “When people are universally ignorant, and debauched in their Manners, they will sink under their own weight without the aid of foreign invaders.” — Samuel Adams

4. “How strangely will the Tools of a Tyrant pervert the plain Meaning of Words!” — Samuel Adams

5. “The absolute rights of Englishmen and all freemen, in or out of civil society, are principally personal security, personal liberty, and private property.” — Samuel Adams

6. “Courage, then, my countrymen, our contest is not only whether we ourselves shall be free, but whether there shall be left to mankind an asylum on earth for civil and religious liberty.” — Samuel Adams

7. “The Opinion of others I very little regard, & have a thorough Contempt for all men, be their Names Characters & Stations what they may, who appear to be the irreclaimable Enemies of Religion & Liberty.” — Samuel Adams

8. “Give me liberty or give me death!” — Patrick Henry

9. “Whoever would overthrow the liberty of a nation must begin by subduing the freeness of speech.” — Benjamin Franklin

10. “Where liberty dwells, there is my country.” — Benjamin Franklin

11. “Liberty must at all hazards be supported. We have a right to it, derived from our Maker. But if we had not, our fathers have earned and bought it for us, at the expense of their ease, their estates, their pleasure, and their blood.” — John Adams

12. “There is not a single instance in history in which civil liberty was lost, and religious liberty preserved entire. If therefore we yield up our temporal property, we at the same time deliver the conscience into bondage.” — John Witherspoon

13. “The true danger is when liberty is nibbled away, for expedience, and by parts” — Edmund Burke

14. “Whenever a separation is made between liberty and justice, neither, in my opinion, is safe.” — Edmund Burke

15. “If we command our wealth, we shall be rich and free. If our wealth commands us, we are poor indeed.” — Edmund Burke

16. “Abstract liberty, like other mere abstractions, is not to be found.” — Edmund Burke

17. “I prefer liberty with danger than peace with slavery.” ― Jean-Jacques Rousseau

18. “Life without liberty is like a body without spirit.”—Kahlil Gibran

19. “The liberties of a people never were, nor ever will be, secure, when the transactions of their rulers may be concealed from them.” — Patrick Henry

20. “When the American spirit was in its youth, the language of America was different: Liberty, sir, was the primary object.” — Patrick Henry

21. “Guard with jealous attention the public liberty. Suspect everyone who approaches that jewel.” — Patrick Henry

22. “Show me that age and country where the rights and liberties of the people were placed on the sole chance of their rulers being good men, without a consequent loss of liberty?” — Patrick Henry

23. “The first thing I have at heart is American liberty; the second thing is American union.” — Patrick Henry

24. “They who can give up essential liberty to obtain a little temporary safety deserve neither liberty nor safety.” — Benjamin Franklin

25. “Liberty does not exist in the absence of morality.” — Edmund Burke

27. “Religion and good morals are the only solid foundation of public liberty and happiness.” — Samuel Adams

28. “A vitiated state of morals, a corrupted public conscience are incompatible with freedom.” — Patrick Henry

29. “Those who deny freedom to others deserve it not for themselves.” — Abraham Lincoln

30. “If liberty means anything at all, it means the right to tell people what they do not want to hear.” — George Orwell

31. “My definition of a free society is a society where it is safe to be unpopular.” — Adlai Stevenson

32. “For to be free is not merely to cast off one’s chains, but to live in a way that respects and enhances the freedom of others.” — Nelson Mandela

34. “The urge to save humanity is almost always a false face for the urge to rule it.” — H.L. Mencken

35. “Liberty means responsibility. That is why most men dread it.” – George Bernard Shaw

36. “Liberty is slow fruit. It is never cheap; it is made difficult because freedom is the accomplishment and perfectness of man.” – Ralph Waldo Emerson

37. “Liberty: One of imagination’s most precious possessions.” – Ambrose Bierce

38. “If ye love wealth better than liberty, the tranquility of servitude better than the animating contest of freedom, go home from us in peace. We ask not your counsels or your arms. Crouch down and lick the hands which feed you. May your chains set lightly upon you, and may posterity forget that ye were our countrymen.” — Samuel Adams

39. “And that the said Constitution be never construed to authorize Congress to infringe the just liberty of the press, or the rights of conscience; or to prevent the people of the United States, who are peaceable citizens, from keeping their own arms; or to raise standing armies, unless necessary for the defense of the United States, or of someone or more of them; or to prevent the people from petitioning, in a peaceable and orderly manner, the federal legislature, for a redress of grievances; or to subject the people to unreasonable searches and seizures of their persons, papers or possessions.” — Samuel Adams

41. “Before the formation of this Constitution, it had been affirmed as a self-evident truth, in the declaration of Independence, very deliberately made by the Representatives of the United States of America in Congress assembled that, “all men are created equal, and are endowed by their Creator with certain unalienable rights.” This declaration of Independence was received and ratified by all the States in the Union and has never been disannulled. May we not from hence conclude, that the doctrine of Liberty and Equality is an article in the political creed of the United States.” — Samuel Adams

42. “Neither the wisest constitution nor the wisest laws will secure the liberty and happiness of a people whose manners are universally corrupt.” — Samuel Adams

43. “Is the relinquishment of the trial by jury and the liberty of the press necessary for your liberty? Will the abandonment of your most sacred rights tend to the security of your liberty? Liberty, the greatest of all earthly blessings – give us that precious jewel, and you may take everything else!” — Patrick Henry

44. “Are we at last brought to such humiliating and debasing degradation that we cannot be trusted with arms for our defense? Where is the difference between having our arms in possession and under our direction, and having them under the management of Congress? If our defense be the real object of having those arms, in whose hands can they be trusted with more propriety, or equal safety to us, as in our own hands?” — Patrick Henry

45. “A vitiated state of morals, a corrupted public conscience are incompatible with freedom.” — Patrick Henry

46. “No free government, or the blessings of liberty, can be preserved to any people but by a firm adherence to justice, moderation, temperance, frugality, and virtue; and by a frequent recurrence to fundamental principles.” — Patrick Henry

49. “Experience should teach us to be most on our guard to protect liberty when the Government’s purposes are beneficent. Men born to freedom are naturally alert to repel invasion of their liberty by evil-minded rulers. The greatest dangers to liberty lurk in the insidious encroachment by men of zeal, well-meaning but without understanding.” — Justice Louis Brandeis

50. “Certainly one of the chief guarantees of freedom under any government, no matter how popular and respected, is the right of citizens to keep and bear arms.” — Hubert H. Humphrey

What acts of liberty do you take for granted today?

When our founding fathers declared war against Britain in 1775, they were fighting for liberty. When Abraham Lincoln signed the 13th Amendment and abolished slavery, he signed in a new era of liberty. Fifty-five years later, women won their liberty when the 19th Amendment was passed. These historic events may seem so far in the past that we take them for granted today, but the truth is, we are still fighting for liberty, even in the 21st century.

Even today, there are many problems around systems that are supposed to protect the people. Our citizens face large amounts of systemic racism, bigotry, and inequality. And we incarcerate more people than almost any other country in the world, many of whom are wrongfully imprisoned. With so many flaws in a system that is supposed to promote liberty and the pursuit of happiness, it can be hard to claim that America is truly free.

Still, we have come a long way in the past 250 years and we can all be grateful for that.

We hope these liberty quotes and sayings inspire you to go out there and make this world a better, more liberated place for all.

Let us know your favorite quote in the comments below!

70 Carl Sagan Quotes On Humanity, Life, the Universe & the Cosmos

50 Carrie Bradshaw Quotes from the Fashionista Herself