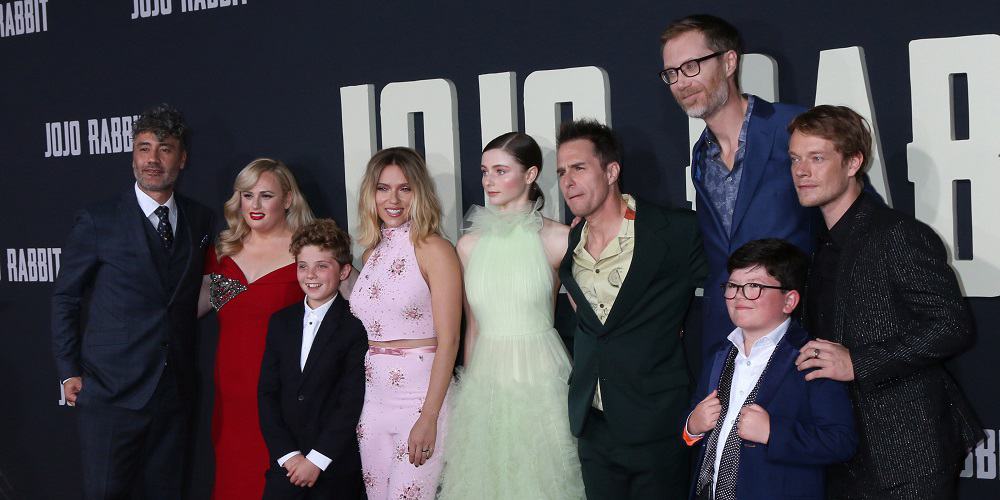 These Jojo Rabbit quotes come from some of our favorite characters like Elsa and Jojo, and even Jojo’s imaginary version of his friend Hitler.

In 2011, Taika Waititi’s mother was telling him about a book she had read called Caging Skies. He reportedly kept telling her he did not have time, but then finally read the book. He reached out to the author and began the process of adapting her book into the movie Jojo Rabbit. The movie premiered on October 18, 2019.

The author, Christine Leunens, said she was inspired to write the story after she heard a story from an elderly woman she had befriended, whose family hid a Jewish man after he had fled Poland. The old lady and the man her family assisted ended up marrying after the war.

So, in a way, Jojo Rabbit is loosely based on an authentic story. However, Taika didn’t want the movie to be another ‘sad Holocaust film,’ and that prompted him to invent the dunderheaded version of Adolph Hitler that Jojo imagines.

Don’t forget to also check out these Holocaust quotes for remembering.

3. “Jojo Betzler. Ten years old. Today, you join the ranks of the Junvolk, in a very special training weekend. It’s going to be intense. Today, you become a man.” — Jojo Betzler

5. “Why are you so happy? Your son is ugly like a monster.” — Jojo Betzler

6. “Okay, well, I’ll just say what I have to say. And that’s this: I’m not scared of you, and I think you should find somewhere else to live. Okay?” — Jojo Betzler

8. “Please take this seriously. Think of this as an expose. I want to know all your secrets.” — Jojo Betzler

9. “Start telling me about your kind.” — Jojo Betzler

11. “Oh, you know, just wandered around being a deformed kid with nothing to live for.” — Jojo Betzler

13. “You were chosen by a pathetic little man who can’t even grow a full mustache.” — Elsa Korr

16. “You’re not a Nazi, Jojo. You’re a ten-year-old kid who likes dressing up in a funny uniform and wants to be part of a club.” — Elsa Korr

19. “Go on then, tell them. But do you know what happens if you do? I’ll tell them you helped me, and your mother too. And you’d all be kaput. And if you tell her you know about me, just one word, I’ll do the world a great big favor, and cut your head off.” — Elsa Korr

21. “Obviously we are demons who love money.” — Elsa Korr

22. Rosie: “Love is the strongest thing in the world.”

Jojo Betzler: “I think you’ll find that metal is the strongest thing in the world, followed closely by dynamite, and then muscles.”

23. “Did you know Jews can read each other’s minds?” — Jojo Betzler

24. “Today you boys will be involved in such activities as war games, ambush techniques, and blowing stuff up.” — Captain Klenzendorf

26. “It took him three weeks to get over the fact that his grandmother was not blond.” — Rosie

28. “I wish more of our young boys had your blind fanaticism.” — Deertz

29. “Finkel, I meant we need dogs for when a city is attacked, not actual German Shepherds.” — Captain Klenzendorf

31. “So, a little about me. Who am I and why am I here, talking to a bunch of little t*tty-grabbers instead of leading my men into battle towards glorious death? Good question. I’ve asked it myself every day since Operation: Screw-Up, where I lost a perfectly good eye in a totally preventable enemy attack. And according to my superiors, you need two eyes to be a meaningful part of the war effort.” — Captain Klenzendorf

32. Rosie: “In your tummy. Like you’re full of butterflies.”

33. “We need someone to walk the clones, because some of them are malfunctioning.” — Fraulein Rahm

34. “I gotta go, we’re having a unicorn for dinner at my place tonight.” — Adolf Hitler

Jojo Betzler: “Got it! I’ll negotiate!”

Adolf Hitler: (talking over him) “Burn down the house and blame Winston Churchill. Or

36. “Let them say whatever they want. People used to say a lot of nasty things about me. ‘Oh, this guy’s a lunatic.’ ‘Oh, look at that psycho. He’s gonna get us all killed.’” — Adolf Hitler

Adolf Hitler: “Of course you can!”

Jojo Betzler: “They call me a scared rabbit.”

Jojo Betzler: “She doesn’t seem like a bad person.”

42. “There’s no reason this thing in the attic has to ruin your life. In fact, you could use it to your advantage.” — Adolf Hitler

Jojo Rabbit quotes from Yorkie and others

Yorkie: “Yeah, I know, definitely not a good time to be a Nazi.”

44. “Our only friends are the Japanese and just between you and me, they don’t look very Aryan.” — Yorkie

[Rosie knees him in the groin, causing him to drop to his knees in pain.]

Rosie Betzler: “It’s because of you my son can’t walk properly and has a messed-up face.”

48. “When I was your age, I had an imaginary friend who got me in so much trouble.” — Captain Klenzendorf

Rosie: “No. I am not that hungry. For now, I am just going to chew on these grapes.”

50. “Enjoy the attention, kid. Not everyone’s lucky enough to look stupid. I for am cursed to look incredibly attractive. Now, we’re going to pluck up your courage, walk out that door, and have an incredible adventure. Okay?” — Rosie

Which of these Jojo Rabbit quotes is your favorite?

The story takes place during the collapse of Nazi Germany in the fictional city of Falkenheim. Johannes “Jojo” Betzler is a ten-year-old child that joins the Deutsches Jungvolk, the junior section of the Hitler Youth.

He is so indoctrinated with the ideals of Nazi Germany that he creates his imaginary friend, a silly and dunce manifestation of the real Hitler. He earns the nickname ‘Jojo Rabbit,’ from his training camp instructor, Captain Klenzendorf, after refusing to kill a rabbit to prove he was worthy enough to be in the Hitler Youth.

Jojo gets a pep talk from “Hitler,” and returns to prove himself, by throwing a Stielhandgranate by himself. It explodes at his feet and leaves him with a limp and a scar. Klenzendorf is demoted and fights with Jojo’s mother about including her son. One day alone at home, Jojo makes a shocking discovery.

His family has been hiding Elsa Korr, a teenage Jewish girl behind the walls of his late sister’s attic bedroom. Jojo is scared and aggressive toward Elsa at first. He also realizes the dilemma he faces, because if it is revealed that Rosie hid Elsa then all three of them would be executed.

Jojo convinces himself that he can use Elsa to learn intel about the ‘enemy.’ Elsa pushes Jojo to question his beliefs, and he slowly develops a crush on her. He even forges love letters from her fiancé, Nathan.

More importantly, though, he questions his patriotic beliefs, causing Adolf to scold him. Jojo’s mother, and his lost father, have been more active in the resistance though and she is discovered for spreading anti-Nazi messaging. One day Jojo sees his mom hanging from the gallows.

The movie and Jojo’s relationship with Elsa changes and develops from this point! I won’t tell you how the movie ends, in case you want to go watch it. The film has won several awards, so you might want to give it a shot if you haven’t seen it.

Did you enjoy reading these Jojo Rabbit quotes and lines? Which of the quotes is your favorite? Let us know in the comment section below.