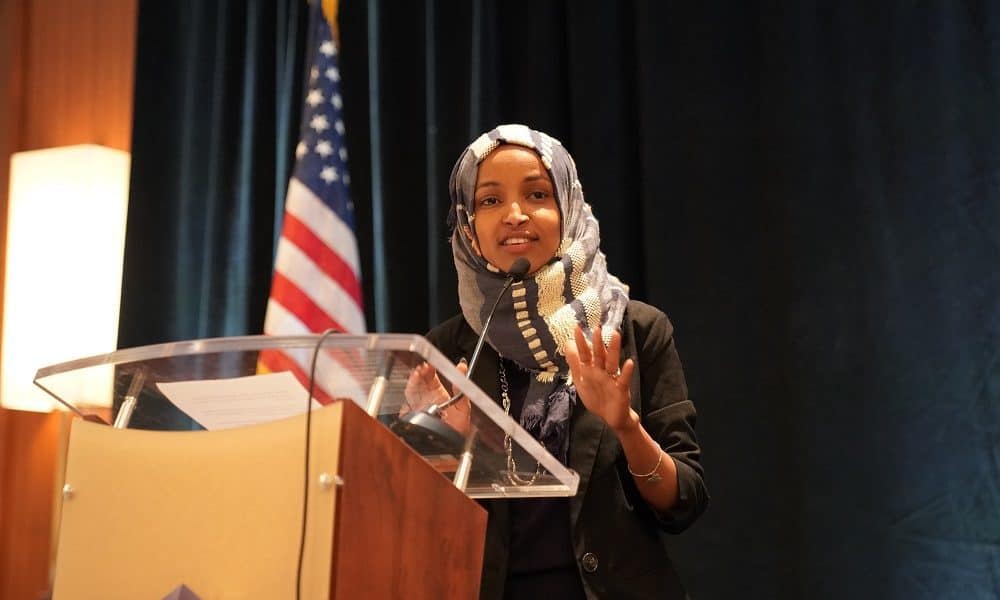 These Ilhan Omar quotes shed light on her policies and beliefs. They also show her courage and resilience, as there is much more to Ilhan Omar than you might have heard.

Omar makes up a progressive wing of the party, often referred to as the squad, that includes Rashida Tlaib, Alexandria Ocasio-Cortez, and Ayanna Pressley. Some Republicans have used the term pejoratively, but members of ‘the squad’ use the term to express solidarity.

Omar grew up in Somalia and is the youngest of seven siblings. She and her family fled Somalia to escape the war, spending four years in a refugee camp. Omar’s family was granted asylum in the U.S. and they arrived in New York in 1995 when Omar was 12. Omar officially became an American citizen in 2000 when she was 17 years old.

Other kids bullied her in school because of her appearance and her wearing of the hijab. She has spoken about how incidents like having gum pressed into her hijab, being pushed downstairs, and physically being taunted while changing for gym class shaped who she grew up to be. She recalled her father explaining that “They are doing something to you because they feel threatened in some way by your existence.” Be empowered by these Ilhan Omar quotes!

Don’t forget to also check out these Alexandria Ocasio-Cortez quotes clarifying her positions.

1. “As an immigrant, I truly believed when I was coming to this country that people had the tools necessary to live a life that is prosperous, that is just, and free. So, every single day, I am shocked with the hypocrisy of this country. That we are the wealthiest nation in the world. But we cannot figure out how to house our homeless people.” — Ilhan Omar

2. “Hope will be found by understanding that diversity is the essence of the American Dream and why we need each other to fulfill it.” — Ilhan Omar

3. “We can walk and chew gum at the same time. Yes, the American people want us to legislate, they want us to insist on furthering their set of values, but they also want us to resist and exercise our oversight powers.” — Ilhan Omar

4. “I am proof that, as Americans, we can embrace our differences.” — Ilhan Omar

5. “I believe in the ideals of America, in liberty, justice, and the pursuit of happiness.” — Ilhan Omar

6. “Truly, this is a nation that sees itself as one that instills hope and is really about allowing people to pursue their dreams.” — Ilhan Omar

7. “This is a land of immigrants, and most come here for opportunity, a second chance.” — Ilhan Omar

8. “Minnesota’s diversity should be its greatest strength, but our neglect of nonwhite students has stifled our progress toward growth and equity.” — Ilhan Omar

9. “No Minnesotan should ever experience preventable health risks from breathing polluted air or from drinking unsafe water.” — Ilhan Omar

10. “I find hope in knowing that I belong to a state that has a lot of people who are champions of change and progress; that we will rise up and fight for justice and equality; that, ultimately, love will trump hate.” — Ilhan Omar

11. “Learning is not limited to the classroom, and Minnesota shouldn’t limit its education resources there, either.” — Ilhan Omar

Ilhan Omar quotes that illustrate why she is such a force

12. “I believe women and minorities often wait for permission to be invited to something; we need to stop doing that.” — Ilhan Omar

14. “I would have loved to have heard a story like mine. I could have used it as an inspiration to get by.” — Ilhan Omar

15. “If we are not actively fighting against regressive ideologies, we are contributing to making them grow.” — Ilhan Omar

16. “I think a big part of my faith teachings is to work together towards equality: that we’re all created equal, and under the eyes of God, we all have a right to freedom and to access our rights equally.” — Ilhan Omar

17. “We know that when people are civically engaged, when they understand what their rights are, when they understand that in a democracy you can challenge governments, you can challenge policymakers, and you can… actually shape and form future policy, I think it changes the perception that a lot of young people have about where power is.” — Ilhan Omar

18. “I come from people who dreamed of a free democratic system. I believe so strongly in the process and equal access.” — Ilhan Omar

19. “When I first arrived in the country, I really didn’t speak much of the language. I knew two words coming here, and they were ‘Hello’ and ‘Shut up.’” — Ilhan Omar

20. “I invited President Trump twice now to come meet my family and my community because he seems to have a lot of opinions about the kind of people we are.” — Ilhan Omar

21. “I was a teenager when 9/11 happened. And I really was uncomfortable with many members of our community feeling like they had to strip themselves of their identity in order to mitigate the violence and the fears that they were feeling.” — Ilhan Omar

22. “I had a lot of challenges starting school, and my dad says I would come home every day crying and feeling bad about the problems I was having with some of the kids. And he would tell me to work hard on learning the language.” — Ilhan Omar

23. “I grew up in a household where we all celebrated who we were. There was no space to make people feel different or ‘less than.’” — Ilhan Omar

24. “We must see others’ struggles as our own, and their success as our success, so we can speak to our common humanity.” — Ilhan Omar

25. “We need to recognize that racism has never been subtle, though it has gone under-reported.” — Ilhan Omar

26. “We didn’t really grow up in a gendered environment. We didn’t have a hierarchy. My family is fearless. They truly believe that they have something to contribute to society and that it is an obligation as humans. I try to embed in my children that they have something to contribute. And that you give because you have to, not to be appreciated.” — Ilhan Omar

27. “I think my faith as a Muslim is very important. One of the core values is that you are always trying to build consensus. So when it comes to figuring out if something is permissible or not in Islam, it’s usually a discussion, and people have to come to a consensus in order for something to be approved.” — Ilhan Omar

28. “I talk a lot about the men in my family because my mother died when I was little, and my grandmother died when my aunts were little, so we didn’t have those kinds of heads of household. But all the members of our household who were female were sort of living as equal and as wise as the male figures in our family.” — Ilhan Omar

29. “My family called me the ‘why kid’ growing up. I always needed to know why something is happening, why I had to do something, why whatever.” — Ilhan Omar

30. “I know that when we interact with those we fear and hate, we will find commonality.” — Ilhan Omar

31. “You can’t hate up close. Any time you have an opportunity to go talk with someone, the chances of them hating you lessen. So that is a practice we all should adopt.” — Ilhan Omar

32. “We must begin the work of dismantling the whole system of oppression, wherever we find it.” — Ilhan Omar

33. “Every student has something to offer, and every student deserves a nurturing learning environment.” — Ilhan Omar

34. “Our immigration policy should be based in compassion and a desire to help the other.” — Ilhan Omar

35. “We need to be constantly reminded that this is a representative democracy, and we need to be in tune to what people are talking about.” — Ilhan Omar

36. “We can all agree that we need to be helping small businesses. All of us can agree that the cost of higher education is too high, and college debt is too big of a burden for young people.” — Ilhan Omar

39. “We’ve become the party that wants to appease everyone and no one. And I think the only way that the Democrats become viable again is if we have people who have moral clarity and courage to say what they need to say and fight for what they need to fight for.” — Ilhan Omar

41. “I look forward to being a voice of reason in fighting for transparent and accountable budgets.” — Ilhan Omar

Powerful Ilhan Omar quotes that prove she is courageous and resilient

43. “I was born in that breath of recognizing that they might be more powerful than you are, that they might have more technology than you have, they might think that they are wiser than you, they might control all of the institutions, but you control your mind, and that is what sets you free.” — Ilhan Omar

45. “I’m a survivor of war. And if I survived militia, I certainly can survive these people.” — Ilhan Omar

46. “The house I was born in, in Somalia, was right next to a big market. A lot of beggars or panhandlers would be in front of our house constantly, and my grandfather and grandmother would always invite them in to have food with us and have them take whatever was leftover.” — Ilhan Omar

47. “Life in Somalia before the civil war was beautiful. When the war happened, I was 8 years old and at that stage of understanding the world in a different way.” — Ilhan Omar

48. “My kids are the reason I continue to strive for something better. They know – as kids who are Muslim, Somali, black Americans – that they’ve always been part of a struggle and that change isn’t easy.” — Ilhan Omar

49. “People often talk about how I’m courageous, but I believe everybody should be courageous. Courage is being scared to death but remaining resolute.” — Ilhan Omar

50. “I know how it feels to be hated because of my religious beliefs.” — Ilhan Omar

What did you learn from these Ilhan Omar quotes?

In high school, Omar volunteered as a student organizer. She went to North Dakota State University in 2011 and graduated with a bachelor’s degree in political science and international studies. Omar was also a Policy Fellow at the University of Minnesota’s Humphrey School of Public Affairs.

She served as campaign manager for Kari Dziedzic’s reelection campaign in 2012. Then she managed Andrew Johnson’s campaign for Minneapolis City Council and became his Senior Policy Aide until 2015.

She ran her own political race in 2016, running for a Minnesota House of Representatives seat in District 60B on the Democratic–Farmer–Labor (DFL) ticket. She defeated Mohamud Noor and incumbent Phyllis Kahn in the DFL primary.

Her chief opponent, Republican nominee Abdimalik Askar, another activist in the Somali-American community, withdrew from the campaign in August. Her first term as a legislator in the United States House of Representatives began on January 3, 2017. As you might have seen from the quotes above, she has big plans for her future in politics.

What’s your biggest takeaway from these Ilhan Omar quotes and sayings? Do you have any other favorite quotes to add? Let us know in the comment section below.

50 Robert Kennedy Quotes That Could Heal a Nation