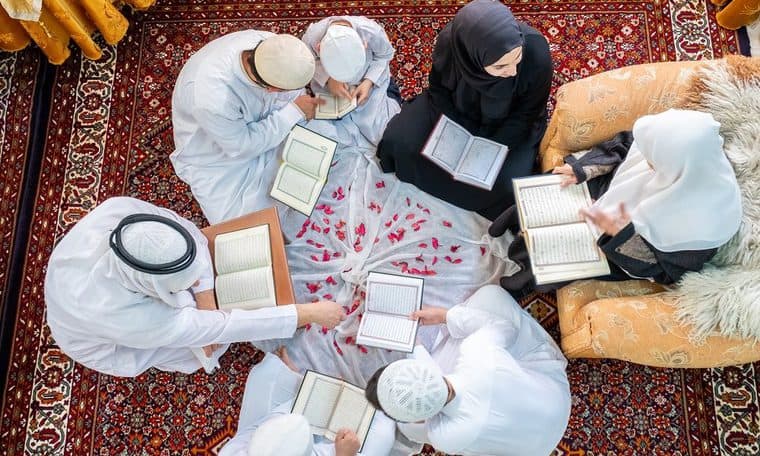 These Hafiz quotes are about love, the heart, and friendship, but are they really his?

Xāwje Shams-od-Dīn Moḥammad Ḥāfeẓ-e Shīrāzī, or Hafez, as he is more commonly referred to, was a 14th-century Persian poet. You will see his name spelled both with an “i” and “e” and both are accepted spellings.

What does his pen name mean? Well, it is an Arabic word meaning “one who remembers” and “keeper.” The meaning of his name seems to fit poetically with a man who wrote poems about love and life.

Coupled with the fact that his popular works are often found in the homes of people living in Persian-speaking areas, who learn his poems by heart. They literally remember and keep them and integrate his words into their days, using them as proverbs and sayings.

According to an opinion piece by Omid Safi, the Director of the Duke Islamic Studies Center, most of what is attributed to Hafiz is actually the work of an American poet, named Daniel Ladinsky.

Keep reading through these Hafiz quotes (and Ladinsky’s ‘interpretations’ of them) for some inspiring words about life.

Hafiz poetry quotes about love and the human heart

1. “For I have learned that every heart will get what it prays for most.” ― Hafiz

2. “The heart is a thousand stringed instrument that can only be tuned with love.” ― Hafiz

3. “Let’s get loose with compassion; let’s drown in the delicious ambiance of love.” ― Hafiz

4. “All your wounds from craving love exist because of heroic deeds.” ― Hafiz

6. “Love is the funeral pyre where I have laid my living body.” ― Hafiz

7. “Look what happens with a love like that; it lights the whole sky.” ― Hafiz

8. “When all your desires are distilled, you will cast just two votes: to love more and be happy.” ― Hafiz

10. “And even though the drunkenness of love has ruined me, my being’s built upon those ruins for eternity.” ― Hafiz

13. “Listen: The terrain around here is far too dangerous for that.” ― Hafiz

14. “All the false notions of myself that once caused fear, and pain have turned to ash as I neared God.” ― Hafiz

16. “Light will someday split you open; even if your life is now a cage.” ― Hafiz

17. “Now that your worry has proved such an unlucrative business, why not find a better job?” ― Hafiz

18. “Greatness is always built upon this foundation: The ability to appear, speak, and act as the most common man.” ― Hafiz

Hafiz quotes about friends and lovers

21. “This is the kind of Friend you are: Without making me realize my soul’s anguished history, you slip into my house at night. And while I am sleeping, you silently carry off all my suffering and sordid past in your beautiful hands.” ― Hafiz

23. “Art is the conversation between lovers. Art offers an opening for the heart. True art makes the divine silence in the soul break into applause.” ― Hafiz

24. “Let’s open all the locked doors upon our eyes that keep us from knowing the intelligence that begets love; and a more lively and satisfying conversation with the friend.” ― Hafiz

25. “Let’s hold hands and get drunk near the sun and sing sweet songs to God until He joins us with a few notes from his own sublime lute and drum.” ― Hafiz

28. “Young lad, may you be an old man, listen to my advice. Love does not put much stock on wisdom: deny it if you desire to caress the tresses of the beloved.” ― Hafiz

29. “Let’s turn loose our golden falcons so that they can meet in the sky where our spirits belong–necking like two hot kids.” ― Hafiz

31. “The Earth would die if the sun stopped kissing her.” ― Hafiz

32. “I am a hole in the flute that the Christ’s breath moves through; listen to this music.” ― Hafiz

34. “I wish I could show you, when you are lonely or in darkness, the astonishing light of your own being!” ― Hafiz

37. “The difference between a good artist and a great one is: The novice will often lay down his tool or brush then pick up an invisible club on the mind’s table and helplessly smash the easels and jade. Whereas the vintage man no longer hurts himself or anyone and keeps on sculpting light.” ― Hafiz

38. “What do sad people have in common? It seems they have all built a shrine to the past and often go there, and do a strange wail and worship. What is the beginning of happiness? It is to stop being so religious like that?” ― Hafiz

39. “How did the rose ever open its heart and give to this world all its beauty?” ― Hafiz

40. “Do not judge us, you who boast your purity. No one will indict you for the faults of others.” ― Hafiz

41. “What is it to you whether I am virtuous or a sinner? Busy yourself with yourself!” ― Hafiz

42. “For as you talk of God, I see great parades with wildly colorful bands streaming from your mind and heart, carrying wonderful and secret messages to every corner of this world.” ― Hafiz

Hafiz quotes about poems, writing, and other life pursuits

43. “Sometimes I say to a poem, “I don’t have the strength to wring out another drop of the sun.” ― Hafiz

44. “And the poem will often respond by climbing onto a barroom table: then lifts its skirt, winks, causing the whole sky to fall.” ― Hafiz

45. “This was also a method of “signing” the poem, as one might sign a letter to a friend, or a painting.” ― Hafiz

46. “I do not feel like writing verses; but as I light my perfume burner with myrrh and jasmine incense, they suddenly burgeon from my heart, like flowers in a garden.” ― Hafiz

47. “Stay close to anything that makes you glad you are alive.” ― Hafiz

49. “What happens when your soul begins to awake in this world?” ― Hafiz

50. “Run my dear, from anything that may not strengthen your precious budding wings. Run like hell my dear, from anyone likely to put a sharp knife into the sacred, tender vision of your beautiful heart.” ― Hafiz

What did you learn from these Hafiz quotes?

Are these genuine Hafiz quotes, or original works by Ladinsky? According to the introductions to his books, Ladinsky explains that he offers interpretations and renderings of the poets, rather than literal or scholarly translations.

Some of these quotes attributed to Hafiz have come from Ladinsky’s books, but critics and scholars point out his poems are original works, and not true translations or interpretations of Hafez. In response, Ladinsky has expressed that he is “faithful to the living spirit” of Hafiz, Rumi, and other mystic poets. What exactly is a mystic poet?

Like Hafiz, a mystic poet, is someone who expresses the spiritual connection between humanity and God, or other mystical elements. There is a heavy focus on the soul and finding peace. Hafiz, or at least the words we attribute to him, are lyrical and beautiful, and certainly do just that!

What is your favorite Hafiz quote or poem? You can use the comment section below to share your thoughts!

50 Raymond Reddington Quotes from The Blacklist

How to Keep a Conversation Going: 8 Simple Tips