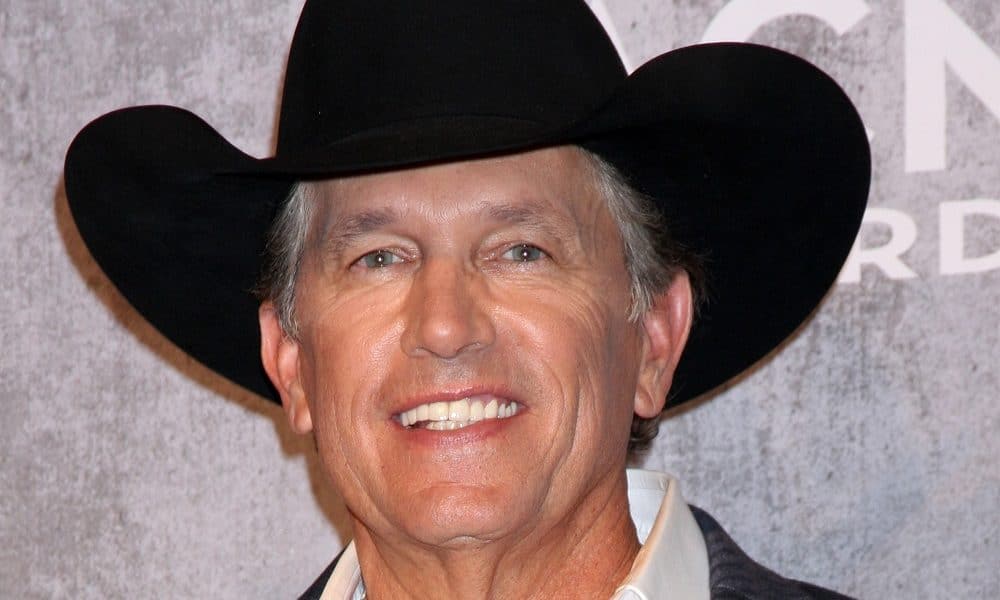 George Strait holds the reigning unofficial title of ‘The King of Country Music’ because he is largely responsible for the genre’s revival in the 80s. His iconic country look and sound definitely fit the bill, but there are other reasons he is a legend.

His award case is probably filled to bursting as he has won Entertainer of the Year three times, and he has 22 total CMA Awards. The Academy of Country Music named Strait Artist of the Decade, too!

He’s also a Grammy award winner and has produced 33 platinum albums. 13 of his albums have even gone multi-platinum! People love him so much (especially those in Texas), that there is even a Texas holiday in his honor, and several of these George Strait quotes are about Texas!

Keep reading to learn more about George Strait and see what he had to say about love, life, and of course, country music.

Don’t forget to also check out these Frank Sinatra quotes about life, love and New York.

1. “Bob Wills and the Texas Playboys are simply the best band that ever was.” ― George Strait

2. “I love to fish offshore for billfish and have fished all over for them from the Bahamas, St. Thomas, Venezuela, Panama, Costa Rica, Mexico to the Texas gulf. I haven’t made it to Australia yet, but someday I’m going.” ― George Strait

3. “I spend most of hunting season at the ranch. We all love to hunt whitetails, and we have a pretty good supply in South Texas. I also love to hunt elk in Arizona, mule deer in Utah, and I’ve been to Canada to hunt caribou.” ― George Strait

4. “Always singing for the great state, for sure… But, you know, you don’t want to do a song just because it’s got Texas in it. Sometimes that can get a little hokey. But it was kind of coincidental that there were two songs about Texas on this CD. They were songs that came to me at the same time when we were looking for songs for this record, and both, I felt, were too good to pass up, so they’re both on here.” ― George Strait

7. “In all the world, you’ll never find a love as true as mine.” ― George Strait

9. “On the Richter scale of love and romance, you’ve hit a twelve.” ― George Strait

10. “You’re the only one and only My heart’s beating for I love you, need I say more.” ― George Strait

11. “From here on after, let’s stay the way we are right now. And share all the love and laughter that a lifetime will allow.” ― George Strait

12. “I’m not the hero who will always save the day, don’t always wear a white hat, don’t always know the way. I may not even be the dream you wanted to come true, but I’ll always be the man in love with you.” ― George Strait

14. “I’m a country singer. I love all kinds of music, but country is where my loyalty lies. That’s just me and what I do, and I’m not going to change it.” ― George Strait

16. “I want to reach the point where people hear my name and immediately think of real country music.” ― George Strait

17. “Country music is important to me, and I love it, but it’s not my whole life.” ― George Strait

18. “This is the kind of problem you want to have! Country radio has been great to me my whole career. I can’t thank those folks enough.” ― George Strait

19. “I discovered in college that country music could be fun adding some swing to it.” ― George Strait

20. “You know, traditional country music is something that’s going to be around forever.” ― George Strait

21. “You know, legends are people like Haggard and Jones and Wills and Sinatra. Those people are legends. I’m just a young buck out here trying to keep in that same circle with the rest of ’em.” ― George Strait

22. “Swing is my favorite kind of music.” ― George Strait

23. “I listen to Mark Chesnutt and think he’s a great singer – and he really does good material.” ― George Strait

24. “Sinatra, in my opinion, is possibly the greatest male singer of all time.” ― George Strait

25. “I remember old Elvis when he forgot to remember to forget.” ― George Strait

26. “I just continue to look for different material, great material, as good as I can find, and try to go in there and do as good a job as I can do in making it a record. That’s all you can expect. That’s all that you can do.” ― George Strait

27. “I didn’t want to be 40 or 50 years old and still playing clubs; I didn’t feel like I was making any progress, and I actually gave the band notice at one point. I began to have doubts about my abilities.” ― George Strait

28. “I used to do a lot of interviews in the early ’80s when my career started, but it came to a point when I decided I didn’t want to talk anymore, and people kind of understood that and left me alone.” ― George Strait

29. “Of all the songs I’ve recorded, ‘Amarillo By Morning’ always sticks out in my mind.” ― George Strait

30. “In the beginning, I wanted to be successful. I wanted to make and have hit records. And I wanted everything that went along with it.” ― George Strait

31. “I think that all my albums are different enough where I don’t feel like I did this the last time.” ― George Strait

32. “I’ve been blessed with the ability to sing, and that has taken me so many places I never would have gone otherwise.” ― George Strait

33. “I can only say thank you and thanks also to all of the great songwriters who wrote those wonderful songs that became number ones.” ― George Strait

34. “I’m always looking for great songs, and not being much of a songwriter, I depend on great songwriters to send them to me. I go through tons of stuff, and sometimes you just find material that kind of fits and becomes something special.” ― George Strait

35. “I loved making Pure Country. It was a great learning experience for me, seeing another part of the entertainment industry.” ― George Strait

36. “I’ve had great fans, and they’ve been so loyal over the years.” ― George Strait

37. “My son had toyed with the idea of writing and trying to write a little bit, so that kind of gave me the bug to write also.” ― George Strait

38. “Even though I’ve been doing it for so long, I still feel fresh. Even when I walk out on stage, I still feel pretty much the same as I’ve always felt.” ― George Strait

39. “I get asked sometimes, ‘What’s the highlight of my career?’ because I’ve been doing it for so long, and I always have a hard time coming up with something because so many good things have happened.” ― George Strait

40. “I like the part where you walk up on the stage and you’re up there for the show. I like that part.” ― George Strait

41. “I don’t think my music’s as traditional as people make it out.” ― George Strait

44. “You will always be the miracle that makes my life complete. And as long as there is breath in me, I’ll make yours just as sweet.” ― George Strait

46. “I got exes all across the country, and I owe everybody in town. I got bill collectors a-callin’ me up, and lawyers trying to track me down.” ― George Strait

47. “The almighty dollar and the lust for worldwide fame, slowly killed tradition, and for that, someone should hang.” ― George Strait

48. “As we look into the future, it’s as far as we can see. So let’s make each tomorrow be the best that it can be.” ― George Strait

49. “My weakness for beautiful women is my most expensive vice, I still believe in matrimony, but I can’t afford another try.” ― George Strait

50. “Life’s not breaths you take, but the moments that take your breath away.” ― George Strait

What did you learn from these George Strait quotes?

George Harvey Strait, Sr., was born in wait for it, Poteet, Texas. He grew up in nearby Pearsall, where his father, a junior high math teacher. His dad also owned of a 2,000-acre cattle ranch outside of Big Wells, Texas, where the family worked the weekends and summer. His parents divorced and his mom moved away with his sister. He and his brother remained with their dad.

In high school, Strait played in a rock-and-roll garage band. Strait’s early inspiration included the Beatles and other popular groups. However, he started to like country more after watching live performances and hearing singers like Merle Haggard, George Jones, and Bob Wills. He even credited Frank Sinatra with influencing his style.

While Strait may not hold the record for best-selling country artist, he has done well for a small-town boy from Texas. Interestingly, he also earned a degree in Agriculture from Texas State University, which also awarded him an honorary doctoral degree! Even people who aren’t big country music fans will recognize the name, George Strait.

: Spring Cleaning, It’s Not Just for the Garage by Chris Livingston ::.

50 Valerie Jarrett Quotes From An American Businesswoman and Politician