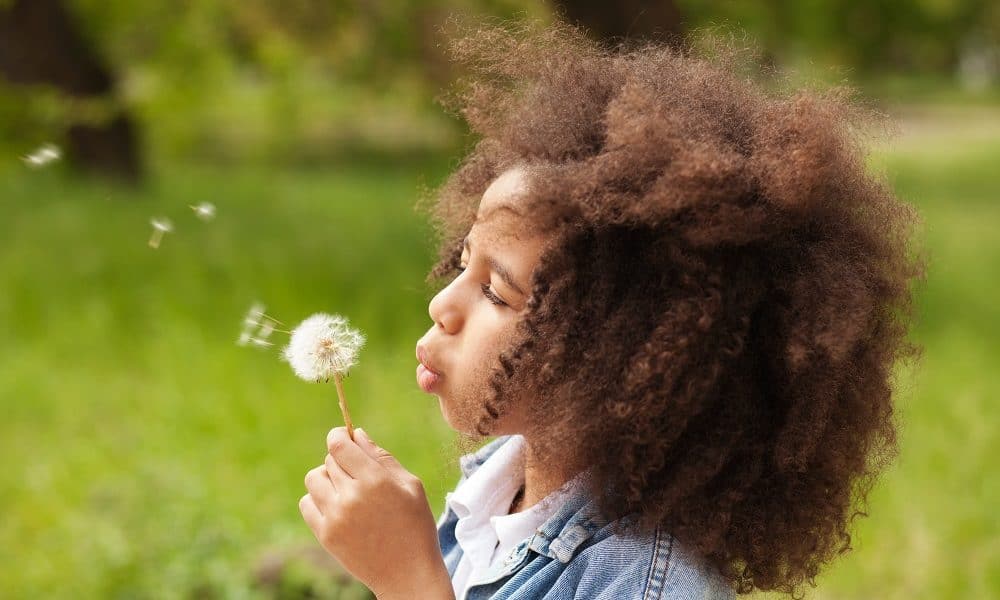 It is springtime, and the dandelions are everywhere! Some people get annoyed when this little yellow flower-like weed pops up all around their yards, but not me. It might be classified as a weed, but it is a part of the daisy family. So, just what is wrong with dandelions? Not much, really! In fact, these inspirational dandelion quotes will give you a new appreciation for the plant.

Unlike other weeds, they are noxious, which means they do not cause an ecological, economic, or public health threat. The only thing this little weed is guilty of is spreading its seeds easily and growing everywhere! That attribute can also make for some beautifully whimsical dandelion quote tattoo ideas!

Dandelions are actually edible and even good for you! The plant is loaded with vitamins, minerals, and fiber. Dandelion greens can be eaten (cooked or raw), and are an excellent source of vitamins A, C, and K. It even has vitamin E, folate, and small amounts of other B vitamins. Enjoy these dandelion quotes and sayings!

Don’t forget to also check out these lemon quotes that will help you live a life full of zest.

The best dandelion quotes for tattoos

1. “Sometimes you have to fall before you fly.”

4. “Behaving as the wind behaves.”

6. “Count the garden by the flowers, never by the leaves that fall.”

7. “Every breath is a second chance.”

8. “Be like a dandelion, whenever they fall apart, they start again. Have hope.” ― Unknown

9. “Beautiful as a dandelion-blossom golden in the green grass, this life can be.” ― Edna St. Vincent Millay

10. “Dandelions, like all things in nature, are beautiful when you take time to pay attention to them.” ― June Stoyer

13. “No creature is fully itself till it is, like the dandelion, opened in the bloom of pure relationship to the sun, the entire living cosmos.” ― D. H. Lawrence

14. “By the time we left college, I had become my own image: a dandelion in the flower bed of society. Kinda cute, but still a weed.” ― Anne Fortier

16. “In a world full of roses, stand out like a dandelion in the middle of a green, plush lawn!” ― June Stoyer

17. “Don’t hover around lives that you are supposed to touch only for a brief while. If you don’t know how to drift away, ask a dandelion and it will show you the way!” ― Indhumathi

18. “Pull out the weeds, or make peace with the dandelions.” ― Frank Sonnenberg

19. “Never overlook wallflower at dance; may be dandelion in grass.” ― Confucius

20. “What I need is the dandelion in the spring. The bright yellow that means rebirth instead of destruction. The promise that life can go on, no matter how bad our losses. That it can be good again.” ― Suzanne Collins

21. “If you find yourself worrying, go outside, take three breaths, address a tree and quietly say, ‘Thank you.’ If you can’t find a tree, a dandelion will do… Nature is magic.” ― Robert Bateman

22. “Grabbing the dandelion in my fist, taught me a thing; no longer did they belong to the sky, nor could I call them mine. There is beauty in every let-go.” ― Kavisha

23. “Don’t intend to be like the dandelions because they might collapse beautifully, but unlike you, they can never be glued back into a whole ever again!” ― Manisha

Dandelion quotes and sayings about comparing them to other things

24. “Once an idea is out and about, it can’t be called back, silenced or erased. You can’t contain it, any more than you could put the head of a dandelion back together after the wind has scattered its seeds.” ― P.W. Catanese

25. “What an indulgence it would be, to just blow off my head, all my mean spirits disappearing with a gun blast, like blowing a seedy dandelion apart.” ― Gillian Flynn

26. “I watch the ashes swim around like dandelion puffs, making swirls where bodies and walls once stood.” ― Lauren DeStefano

27. “Scandals are like dandelion seeds–they are arrow-headed, and stick where they fall, and bring forth and multiply fourfold.” ― Ouida

28. “Sometimes it seemed to him that his life was delicate as a dandelion. One little puff from any direction, and it was blown to bits.” ― Katherine Paterson

29. “I was as unburdened as a piece of dandelion fluff, and he was the wind that stirred me about the world.” ― Sarah J. Maas

30. “Some ideas, like dandelions in lawns, strike tenaciously: you may pull off the top but the root remains, drives down suckers and may even sprout again.” ― Elizabeth Bowen

32. “So much love, too much love, it is our madness, it is rotting us out, exploding us like dandelion polls.” ― John Updike

33. “Dandelions are just friendly little weeds who only want to be loved like flowers.” ― Heather Babcock

34. “Nobody loves the head of a dandelion. Maybe because they are so many, strong, and soon.”― Toni Morrison

35. “The man who worries morning and night about the dandelions in the lawn will find great relief in loving the dandelions.” ― Liberty Hyde Bailey

36. “Next time you see a yardful of sprouting dandelions, note that they look remarkably like things we call “flowers.” And later, when the flowers turn into fluff balls, look closely at one of those fluff balls and ask yourself whether it’s really so unattractive.” ― Robert Wright

37. “You fight dandelions all weekend, and late Monday afternoon there they are, pert as all get out, in full and gorgeous bloom, pretty as can be, thriving as only dandelions can in the face of adversity.” ― Hal Borland

38. “If dandelions were rare and fragile, people would knock themselves out to pay $14.95 a plant, raise them by hand in greenhouses, and form dandelion societies and all that. But, they are everywhere and don’t need us and kind of do what they please. So we call them weeds and murder them at every opportunity.” ― Robert Fulghum

39. “Why doesn’t constant trampling defeat the dandelion? The key to its strength is its long and sturdy root, which extends deep into the earth. The same principle applies to people. The true victors in life are those who, enduring repeated challenges and setbacks, have sent the roots of their being to such a depth that nothing can shake them.” ― Daisaku Ikeda

40. “If dandelions were hard to grow, they would be most welcome on any lawn.” ― Andrew Mason

41. “How can you seize its beauty with your meagre power of destruction? Blown by the wind, a dandelion still spreads happy florets!” ― Kavisha

42. “You knew that you could have grown like a weed, raising on other’s strength. But you chose to bloom like a dandelion, creating your own magic. Trust me darling, nothing can be more beautiful than this.” ― Kriti

43. “Learn to let go like a dandelion. And watch the love grow on you, freshly. Again.” ― Soumojit Dutt

44. “Those cotton dandelions wafting on the breeze,

Are nothing but the immigrants passing through these trees.

To make their kids (seeds) enjoy their flight!”

46. “But dandelions were what she chiefly saw. Yellow jewels for everyday studding the patched green dress of her back yard. She liked their demure prettiness second to their everydayness; for in that latter quality she thought she saw a picture of herself, and it was comforting to find that what was common could also be a flower.” ― Gwendolyn Brooks

47. “Go for a short walk in a soft rain – lovely – so many wild flowers startling me through the woods and a lawn sprinkled with dandelions, like a night with stars. And through it all the sound of soft rain like the sound of innumerable earthworms stirring in the ground.” ― Anne Morrow Lindbergh

48. “It gives one a sudden start in going down a barren, stoney street, to see upon a narrow strip of grass, just within the iron fence, the radiant dandelion, shining in the grass, like a spark dropped from the sun.” ― Henry Ward Beecher

49. “Masked allegations were never in the light. And yet, the dandelions here, sit pretty against the sky.” ― Unknown

50. “I broke away like a fluffy dandelion sprouting its serene parachute pappus, waiting for the breeze to recede away.” ― Kashyapi

What did you learn from these dandelion wish quotes?

If you didn’t know that dandelions are edible, and are often found in many health supplements, then these other dandelion uses might also surprise you! Dandelions are a rich source of beta-carotene and polyphenolic compounds. These compounds are known for their strong antioxidant capabilities, which help prevent aging and certain diseases.

You might wonder if it is safe to eat a dandelion straight from your yard. The answer is yes (as long as it hasn’t been sprayed with anything)! Now, that might seem a little strange, so if you want to prepare it somehow, here are a few ideas. You can make dandelion tea, use dandelion root as a coffee replacement, and even fry the flowers in tempura batter!

If you don’t want to cook your dandelions, then look for a supplement that lists dandelion or dandelion root in the ingredients. Otherwise, you can always wait for the petals to turn into the whispery seeds, blow, and make a wish! If a little child should pick the pretty flower for you before then, put it in some water, and give it a little love.

What’s your biggest takeaway from these dandelion quotes and sayings? Do you have any other favorite quotes to add? Let us know in the comment section below.

50 Heath Ledger Quotes About His Life and Career

Afraid to Say No Because You Might Miss Out on a Big Opportunity?