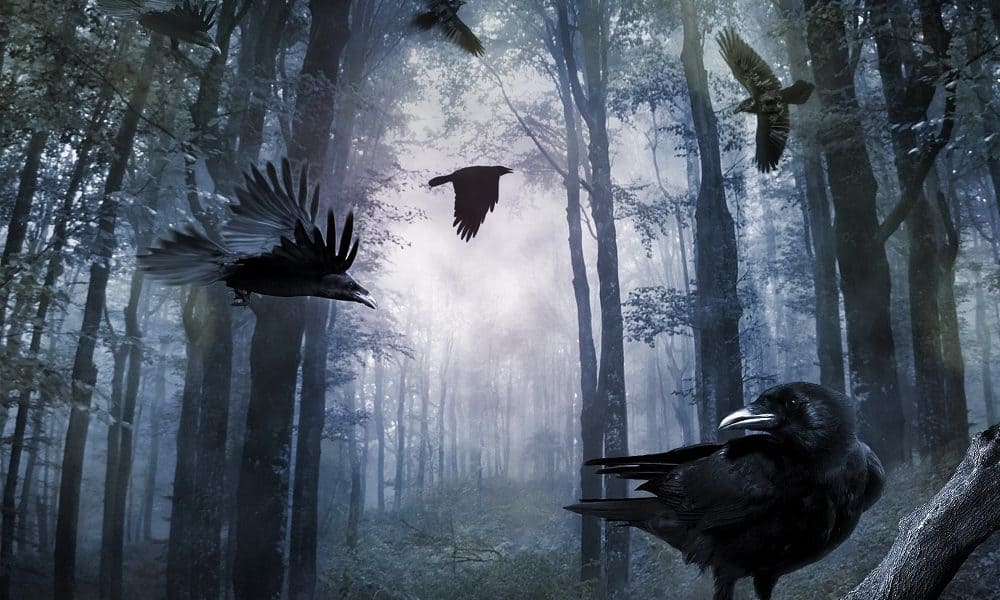 A crow is a medium to large-sized bird with a bit of a poor reputation. They are known for destroying plants inside gardens and are regarded as pests. The crow also carries some stigma when it comes to superstitions. Just why is the crow associated with death? Some of these crow quotes about death and violence shed a little more light on that subject.

Ravens and crows are scavengers who will pick apart dead bodies. They are also associated with battlefields, cemeteries, and other creepy places. People believe that when they circle in large numbers, animals or people are expected to die. It probably doesn’t help that a large group of crows is called ‘a murder of crows.’ Yup, you read that right. Not a flock, but a murder.

What some people don’t know about crows, though, is that they are very smart and trainable. They can also remember the faces of people who are mean (or kind) to them. They are very social creatures who share food and look out for each other. They will attack any predators together by creating a little mob of birds all working together. Keep reading to learn more about crows, and the superstitions surrounding the black bird.

Don’t forget to also check out these bird quotes for when you want to spread your wings and fly.

Crow quotes about death and violence

1. “Crows will fight over a dead man’s flesh and kill each other for his eyes.” ― George R. R. Martin

3. “If the crow had been satisfied to eat his prey in silence, he would have had more meat and less quarreling and envy.” ― Horace

4. “Crows pick out the eyes of the dead when the dead have no longer need of them, but flatterers mar the soul of the living, and her eyes they blind.” ― Epictetus

5. “Crows squawked raucously in the trees. It sounded like they were tearing something apart, something they didn’t even want, just for the fun of destroying it.” ― Janet Fitch

6. “What does evil look like to crows from up in the sky? They’re brave enough to play hide-and-seek with the dead.” ― Leah Weiss

7. “It is better to fall among crows than flatterers, for those devour only the dead. These the living.” ― Antisthenes

8. “People once believed that when someone dies, a crow carries their soul to the land of the dead. But sometimes, something so bad happens that a terrible sadness is carried with it and the soul can’t rest. Then sometimes, just sometimes, the crow can bring that soul back to put the wrong things right.” ― James O’Barr

9. “The crow bewails the sheep and then eats it.” ― George Herbert

10. “The law is a gun, which if it misses a pigeon always kills a crow; if it does not strike the guilty, it hits someone else. As every crime creates a law, so in turn, every law creates a crime.” ― Edward Bulwer-Lytton, 1st Baron Lytton

13. “If men had wings and bore black feathers, few of them would be clever enough to be crows.” ― Henry Ward Beecher

14. “If you wish to upset the law that all crows are black, you mustn’t seek to show that no crows are, it is enough if you prove one single crow to be white.” ― William James

15. “Even the blackest of them all, the crow, renders good service as your man-at-arms, crushing the beetle in his coat of mail. And crying havoc on the slug and snail.” ― Henry Wadsworth Longfellow

16. “A group of men in evening clothes looks like a flock of crows and is just about as inspiring.” ― Mark Twain

17. “The black crow thinketh her own bird’s white.” ― Gavin Douglas

18. “And although I have seen nothing but black crows in my life, it doesn’t mean that there’s no such thing as a white crow. Both for a philosopher and for a scientist, it can be important not to reject the possibility of finding a white crow. You might almost say that hunting for ‘the white crow’ is science’s principal task.” ― Jostein Gaarder

19. “There is a bird who by his coat, And by the hoarseness of his note, Might be supposed a crow.” ― William Cowper

20. “Geese are white, crows are black. No argument will change this.” ― Laozi

Crow quotes about their intelligence and cleverness

21. “Crows are incredibly smart. They can be taught five things on the drop.” ― Robbie Coltraine

22. “When a crow says an intelligent thing, chickens may laugh at it. This is the laughing of the sand castles at the powerful waves!” ― Mehmet Murat ildan

23. “‘As the crow flies,’ a popular and picturesque expression to denote a straight line.” ― William Henry Maule

24. “Nothing is unreal as long as you can imagine like a crow.” ― Munia Khan

25. “A crow can recall every route it has ever taken, and Cadin had been this way before. Crows are messengers, spies, guides, companions, harbingers of luck, deliverers of trinkets and treasures, tireless in all ways, more loyal than any other man or beast.” ― Alice Hoffman

26. “Intellectual is a parrot; wise man is a crow. One is repetitive; other is creative!” ― Mehmet Murat Ildan

27. “It is better to listen to a crow that lives in trees than to a learned man who lives only in ideas.” ― Kate Horsley

28. “I saw a crow building a nest, I was watching him very carefully, I was kind of stalking him and he was aware of it. And you know what they do when they become aware of someone stalking them when they build a nest, which is a very vulnerable place to be? They build a decoy nest. It’s just for you.” ― Tom Waits

29. “A crow, who had flown away with a cheese from a dairy window, sat perched on a tree looking down at a great big frog in a pool underneath him.” ― William Makepeace Thackeray

30. “If you only have brains on your head, you would be as good a man as any of them, and a better man than some of them. Brains are the only things worth having in this world, no matter whether one is a crow or a man.” ― L. Frank Baum

Creepy crow quotes about these little messengers of doom

31. “Never a good sign, he thought, when the crows showed up.” ― Justin Cronin

32. “In many traditions, crows are messengers and close attention is paid to their actions.” ― Robert Moss

34. “Crows are not always available to give warning.” ― Carlos Castaneda

35. “Don’t seem to be on the lookout for crows, else you’ll set other people watching.” ― George Eliot

36. “Angels and crows passed each other, one leaving, the other coming.” ― Jerry Spinelli

37. “Fly away,” sang little lark to the crow, “There is no home for you among the broken promises and empty hearts. We drew the life we never mourned, away with fading dark. Your wings are fashioned from the cold, mindless lies of feathers tarred with pitch!” ― Phen Weston

38. “The crow cawed again overhead, and a strong sea wind came in and burst through the trees, making the green pine needles shake themselves all over the place. That sound always gave me goose bumps, the good kind. It was the sound an orphan governess hears in a book, before a mad woman sets the bed curtains on fire.” ― April Genevieve Tucholke

39. “We heap up around us things that we do not need as the crow makes piles of glittering pebbles.” ― Laura Ingalls Wilder

40. “The crow does not hide its prey, but calls for others to share it; So wealth will be with those of a like disposition.” ― Thiruvalluvar

41. “The eagle never lost so much time as when he submitted to learn from the crow.” ― William Blake

42. “I will make thee think thy swan a crow.” ― William Shakespeare

45. “The crows maintain that a single crow could destroy the heavens. There is no doubt of that, but it proves nothing against the heavens, for heaven simply means the impossibility of crows.” ― Franz Kafka

46. “If you have to eat crow, eat it while it’s young and tender.” ― Thomas Jefferson

47. “The world is a nest of crows; some caw in praise, some caw in derision. But men should be above the reach of praise and blame.” ― Sathya Sai Baba

48. “Eagles do not live alongside with crows. Neither they fly in flocks, nor live in muds.” ― Mladen Đorđević

49. “If you want to fly with the eagles, you can’t hang out with the crows.” ― Brock Lesnar

50. “Our minds are like crows. They pick up everything that glitters, no matter how uncomfortable our nests get with all that metal in them.” ― Thomas Merton

What did you learn from these crow quotes?

There have been some studies that claim crows mourn their dead and fear the danger associated with death. Their ability to recognize faces also helps them process people they perceive to be dangerous. However, the idea that crows are omens or messengers goes back to several ancient religions.

For instance, in Celtic mythology, the warrior goddess Morrighan often appears as a crow or raven. Other times a group of them accompany her. A crow sighting meant that Morrighan is watching—or possibly getting ready to pay someone a visit. In some Welsh myths, the raven is a harbinger of death. Native American cultures viewed the raven or crow as a trickster. People also believed that witches could transform themselves into ravens and fly away.

It’s much more likely that this little black bird has just been stereotyped for centuries. Works like Edgar Allan Poe’s ‘The Raven’ didn’t help change its image!

What did you learn from these crow quotes and sayings? Share your thoughts about crows and ravens with us in the comment section below!

50 Candy Quotes To Sweeten Up Your Day

55 Vision Board Quotes To Help You Visualize Your Future