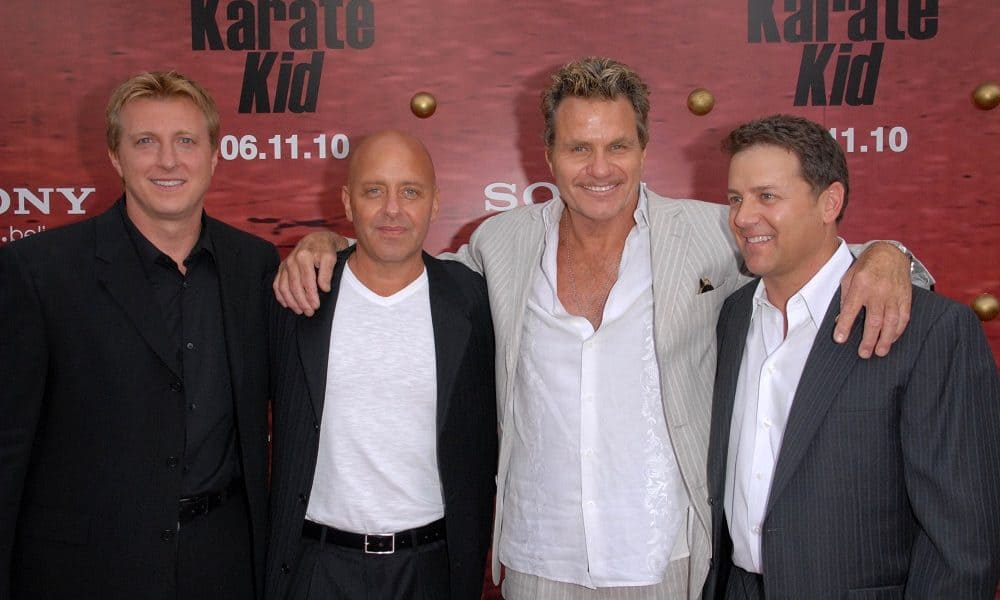 The Karate Kid is a nostalgic part of American 80s culture and when Netflix reunited Daniel LaRusso (Ralph Macchio) and Johnny Lawrence (William Zabka) in the show Cobra Kai, they struck TV gold! Many of the original The Karate Kid cast have appeared in the show.

Sadly, Mr. Miyagi (Pat Morita) passed away in 2005, and while we may not get to see him, he is definitely there in spirit! The Cobra Kai quotes also include some gems from new cast members who play Daniel’s daughter Sam, and Johnny’s son Robby.

Cobra Kai is most assuredly a comedy-drama, and some of these Cobra Kai quotes are so funny they will practically have you rolling on the floor. Johnny delivers some of the best jokes on this show!

Cobra Kai premiered on Netflix in 2018, and the story picks up 34 years after the iconic All Valley Karate Tournament that started it all! Keep reading through these Cobra Kai quotes and learn what we know about Season 4!

Don’t forget to also check out these adventurous Jumanji quotes from the original movie.

1. “When negative feelings overwhelm you, look for the good within yourself.” — Daniel LaRusso

2. “If you have hate in your heart, then you have already lost.” — Daniel LaRusso

4. “You are the only one who can get up when you are down.” — Daniel LaRusso

5. “Sometimes the scars you can’t see are the ones that hurt the most.” — Samantha LaRusso

6. “Everyone’s got a sob story, that doesn’t give you the right to be a bully.” — Samantha LaRusso

7. “Alone we are nothing, but if we work together, we have a shot.” — Samantha LaRusso

Cobra Kai quotes about striking first, no mercy, strength, and the enemy

8. “What, do you want those kids at school to keep dumping shit on your head? You want all the girls to think you’re a wang-less dork? Coz you can stop your training right now, and you can walk outside and let the whole world know you’re a loser. Or you can plant your feet, look your enemy in the eyes AND PUNCH HIM IN THE FACE!” — Johnny Lawrence

9. “If your enemy insists on war, then you take away their ability to wage it.” — Chozen

11. “The world shows no mercy, so, why should we? Some people have it good, but the rest of us, we have to fight for every inch of what’s ours. Not just to score a point. For everything.” — Tory Nichols

12. “All that Miyagi-Do mumbo jumbo, that might score you points in a tournament. But now you’re in the real world kid, you might wanna learn to strike first.” — John Kreese

13. “We do not train to be merciful here. Mercy is for the weak. Here, in the streets, in competition.” — John Kreese

14. “I’m not just gonna teach you how to conquer your fears. I’m going to teach you how to awaken the snake within you. And once you do that, you’ll be the ones who’s feared. You’ll build strength. You’ll learn discipline. And when the time is right, you’ll strike back.” — Johnny Lawrence

15. “Cobra Kai is about strength, if you’re not strong on the inside, then you can’t be strong on the outside.” — Johnny Lawrence

Cobra Kai quotes from Hawk, Miguel, and the rest of the karate kids

18. “You just gotta feel the energy and just live in the moment, you know?” — Hawk

20. “At least I know who I am. You are still trying to be something you’re not.” — Tory Nichols

22. “I’m gonna have to face him sooner or later. Might as well be today.” — Robby Keene

23. “Cool story. Try telling it to someone who gives a shit.” — Robby Keene

30. “When you came into my dojo, you were softer than a babies ass.” — Johnny Lawrence

31. “I didn’t call her a bitch. I said she was bitching at me. There’s a difference… You’re firing me ’cause of that bitch?” — Johnny Lawrence

33. “God, just looking at you makes me feel like a virgin.” — Johnny Lawrence

Johnny Lawrence: “I don’t know what that is, but get off it pronto alright?”

36. “A true Cobra feels no sympathy for its meals.” — John Kreese

37. “Life isn’t always fair. Sometimes the world can be cruel. That’s why you have to learn to be cruel yourselves.” — John Kreese

41. “If I’m extra hard on you, it’s because you have the ability to be better than me.” — Johnny Lawrence

42. “It doesn’t matter if you’re a loser, a nerd, or a freak, The only thing that matters is that you become badass.” — Johnny Lawrence

45. “In the real world, you can’t expect people to do what they’re supposed to do.” — Johnny Lawrence

47. “Back in my day if we want to tease someone, we do it to their face.” — Johnny Lawrence

48. “You know what they say, there’s no such thing as a bad student.” — Johnny Lawrence

49. “You want something, you’ll have to crawl across the floor, use your damn teeth if you have to.” — Johnny Lawrence

50. “Don’t forget, being a badass doesn’t mean be an asshole.” — Johnny Lawrence

Which of these Cobra Kai quotes is your favorite?

You might be wondering when season 4 will come out, and Netflix has confirmed that it will be out in 2021! It seems likely that we will get to watch the next installment of The Karate Kid spinoff in the last quarter, making a premier between October and the end of December! There are some fresh additions to the cast, like Dallas Dupree Young and Oona O’Brien, although not much is known about their characters at this point.

That isn’t too much longer, and fans also got a bit more news from Netflix, when they confirmed that there is a lot more story to tell and picked the show up for a 5th season. So, no, Cobra Kai has not been canceled! The show has a built-in fan base, a great story, and killer talent, so hopefully, it doesn’t go anywhere, anytime soon!

What is your favorite moment from Cobra Kai so far? Let us know in the comment section below!

My Secret to Overcoming the Painful Trap of Perfectionism