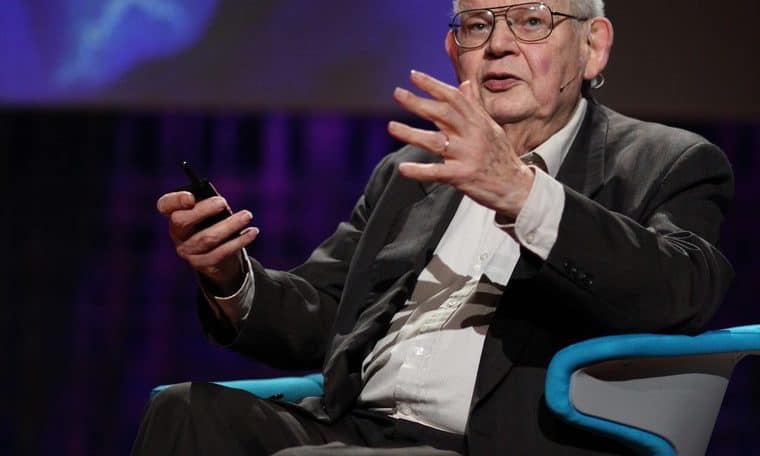 You might not have recognized the name Benoit Mandelbrot at first unless you are a computer scientist, a stock market analyst, a meteorologist, or a math fanatic (or a nerd, as I affectionately called my husband when he got excited that I was writing about Mandelbrot this week).

Now, you might be wondering why those specific professions would immediately recognize this man’s name, but it all makes sense when you know what Benoit Mandelbrot is famous for! You see, Benoit Mandelbrot was a Polish-born French American mathematician, known as the “Father of Fractals.”

What is a fractal you might be wondering (my husband spent twenty minutes trying to remind me about this part of math class…)? Well, Benoit Mandelbrot actually answers this question in some eloquently worded ways, which you can read in these Mandelbrot quotes about fractals, fractions, and other things math!

However, the definition of a fractal is a pattern that is never-ending; they are complex, and self-similar across different scales. If you live where it gets cold, then you see fractals almost every year! A snowflake is a beautiful example of a natural fractal.

Keep reading these Benoit Mandelbrot quotes to learn more about this complex concept that is all around us, and discover how we use fractals in our everyday lives.

Don’t forget to also check out these math quotes for when things just aren’t adding up.

Benoit Mandelbrot quotes about fractals, fractions, and other math things

1. “A fractal is a way of seeing infinity.” — Benoit Mandelbrot

2. “A fractal is a mathematical set or concrete object that is irregular or fragmented at all scales.” — Benoit Mandelbrot

3. “Fractal geometry is not just a chapter of mathematics, but one that helps Everyman to see the same world differently.” — Benoit Mandelbrot

5. “And dimension need not be a whole number; it can be fractional. Now an ancient concept, dimension, becomes thoroughly modern.” — Benoit Mandelbrot

6. “Since algebra derives from the Arabic jabara = to bind together, fractal and algebra are etymological opposites!” — Benoit Mandelbrot

7. “Being a language, mathematics may be used not only to inform but also, among other things, to seduce.” — Benoit Mandelbrot

8. “I do not assert markets are chaotic, though my fractal geometry is one of the primary mathematical tools of ” chaology.” — Benoit Mandelbrot

9. “My current best model of how a market works is fractional Brownian motion of multifractal time. It has been called the Multifractal Model of Asset Returns. The basic ideas are similar to the cartoon versions above though far more intricate, mathematically. The cartoon of Brownian motion gets replaced by an equation that a computer can calculate. The trading-time process is expressed by another mathematical function, called f(propto), that can be tuned to fit a wide range of market behavior.” — Benoit Mandelbrot

10. “My model redistributes time. It compresses it in some places, stretches it out in others. The result appears very wild, very random. The two functions, of time and Brownian motion, work together in what mathematicians call a compound manner: Price is a function of trading time, which in turn is a function of clock time.” — Benoit Mandelbrot

11. “There are very complex shapes which would be the same from close by and far away.” — Benoit Mandelbrot

12. “Why is geometry often described as ‘cold’ and ‘dry’? One reason lies in its inability to describe the shape of a cloud, a mountain, a coastline, or a tree.” — Benoit Mandelbrot

13. “Self-similarity is a dull subject because you are used to very familiar shapes. But that is not the case. Now many shapes which are self-similar again, the same scene from close by and far away, and which are far from being straight or plane or solid.” — Benoit Mandelbrot

14. “Clouds are not spheres, mountains are not cones, coastlines are not circles, and bark is not smooth, nor does lightning travel in a straight line.” ― Benoît Mandelbrot

15. “The brain highlights what it imagines as patterns; it disregards contradictory information. Human nature yearns to see order and hierarchy in the world. It will invent it where it cannot find it.” — Benoit Mandelbrot

16. “For a complex natural shape, dimension is relative. It varies with the observer. The same object can have more than one dimension, depending on how you measure it and what you want to do with it.” — Benoit Mandelbrot

17. “Market crashes are like that. The 29.2 percent collapse of October 19, 1987, arrived without warning or convincing reason; and at the time, it seemed like the end of the financial world. Smaller squalls strike more often, with more localized effect. In fact, a hierarchy of turbulence, a pattern that scales up and down with time, governs this bad financial weather.” — Benoit Mandelbrot

18. “A formula can be very simple and create a universe of bottomless complexity.” — Benoit Mandelbrot

19. “I conceived and developed a new geometry of nature and implemented its use in a number of diverse fields. It describes many of the irregular and fragmented patterns around us, and leads to full-fledged theories, by identifying a family of shapes I call fractals.” — Benoit Mandelbrot

20. “My life seemed to be a series of events and accidents. Yet when I look back, I see a pattern.” — Benoit Mandelbrot

21. “I don’t seek power and do not run around.” — Benoit Mandelbrot

22. “I found myself in the position of that child in a story who noticed a bit of string and – out of curiosity – pulled on it to discover that it was just the tip of a very long and increasingly thick string… and kept bringing out wonders beyond reckoning.” — Benoit Mandelbrot

24. “For most of my life, one of the persons most baffled by my own work was myself.” — Benoit Mandelbrot

25. “There is a saying that every nice piece of work needs the right person in the right place at the right time.” — Benoit Mandelbrot

26. “I spent half my life, roughly speaking, doing the study of nature in many aspects and half of my life studying completely artificial shapes. And the two are extraordinarily close; in one way both are fractal.” — Benoit Mandelbrot

27. “When people ask me what’s my field? I say, on one hand, a fractalist. Perhaps the only one, the only full-time one.” — Benoit Mandelbrot

28. “An extraordinary amount of arrogance is present in any claim of having been the first in inventing something.” — Benoit Mandelbrot

30. “I didn’t want to become a pure mathematician. As a matter of fact, my uncle was one, so I knew what the pure mathematician was and I did not want to be a pure—I wanted to do something different. In fact, I barely missed being number one in France in both schools. In particular, I did very well in mathematical problems.” — Benoit Mandelbrot

31. “I didn’t feel comfortable at first with pure mathematics, or as a professor of pure mathematics. I wanted to do a little bit of everything and explore the world.” — Benoit Mandelbrot

32. “The most important thing I have done is to combine something esoteric with a practical issue that affects many people.” — Benoit Mandelbrot

33. “For a thinking person, the most serious mental illness is not being sure of who you are.” — Benoit Mandelbrot

35. “It presumes that homo economicus is rational and self-interested. Wrong, suggests the experience of the irrational, mob-psychology bubble and burst of the 1990s.” — Benoit Mandelbrot

36. “No one is alone in this world. No act is without consequences for others. It is a tenet of chaos theory that, in dynamical systems, the outcome of any process is sensitive to its starting point-or, in the famous cliche, the flap of a butterfly’s wings in the Amazon can cause a tornado in Texas.” — Benoit Mandelbrot

37. “But clearly, the global economy is an unfathomably complicated machine. To all the complexity of the physical world of weather, crops, ores, and factories, you add the psychological complexity of men acting on their fleeting expectations of what may or may not happen-sheer phantasms.” — Benoit Mandelbrot

38. “The most complex object in mathematics, the Mandelbrot Set, is so complex.” — Benoit Mandelbrot

39. “Both chaos theory and fractal have had contacts in the past when they are both impossible to develop and in a certain sense not ready to be developed.” — Benoit Mandelbrot

40. “One couldn’t even measure roughness. So, by luck, and by reward for persistence, I did found the theory of roughness, which certainly I didn’t expect, and expecting to found one would have been pure madness.” — Benoit Mandelbrot

Wise Benoit Mandelbrot quotes that are not about math

41. “Too often, an event’s importance is not recognized until it is too late for proper recording.” — Benoit Mandelbrot

43. “Markets have a personality.” — Benoit Mandelbrot

44. “There is a joke that your hammer will always find nails to hit.” — Benoit Mandelbrot

45. “Nobody will deny that there is at least some roughness everywhere.” — Benoit Mandelbrot

46. “Take the old one about the engineer, the physicist, and the economist. They find themselves shipwrecked on a desert island with nothing to eat but a sealed can of beans. How to get at them? The engineer proposes breaking the can open with a rock. The physicist suggests heating the can in the sun until it bursts. The economist’s approach: “First, assume we have a can opener…” — Benoit Mandelbrot

47. “Bottomless wonders spring from simple rules, which are repeated without end.” — Benoit Mandelbrot

48. “Think not of what you see, but what it took to produce what you see.” — Benoit Mandelbrot

49. “Asking the right questions is as important as answering them.” — Benoit Mandelbrot

What did you learn from these Benoit Mandelbrot quotes?

Computer scientists, meteorologists, and economists all use aspects of his innovative work or the Mandelbrot set. Mandelbrot’s groundbreaking work with computer graphics created a whole new way to integrate computers in mathematics.

An economist and stock market analyst are familiar with Mandelbrot because he used his theory to explain volatility clustering. He taught us that tame market days (occurring when the price changes less than 3%) are followed by other tame days. Consequently, those “wild” days are often followed by other wild days. So, how does Mandelbrot’s theory help you make money?

Well, it means that you are in a correction or a bear market (or that one is coming). It doesn’t matter which direction the chaos causes the market to move. Whether the market goes up or down is irrelevant, a big move in either direction is a signal that should not be ignored.

How else do we use fractals in our everyday lives? Artists like Jackson Pollock have used them to create stunning pieces of art. Fractals are used in biological sciences too, like helping us understand how bacteria grows. Fractals really are all around us in nature, from things like clouds to food like broccoli.

What’s your biggest takeaway from these Benoit Mandelbrot quotes and sayings? How do you use fractals in your life? Let us know in the comment section below.

The Fascinating Reason We Sabotage Ourselves and Hold Ourselves Back

Ratatouille Quotes That Prove Anyone Can Be Great